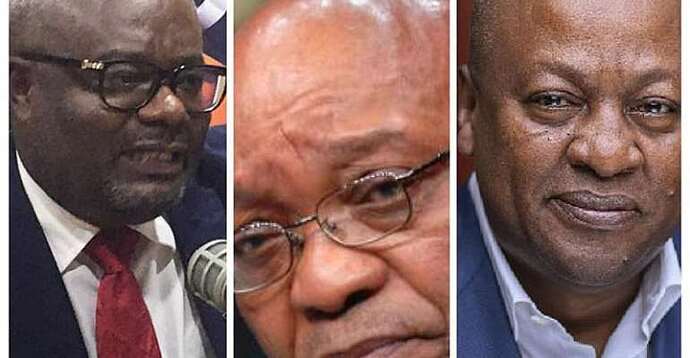 Jacob Zuma, served as South Africa’s President from 2009 to 2018, when he resigned under growing pressure from his party, the African National Congress (ANC), amid declining electoral support and public anger at corruption allegations during his tenure.

On June 29, the constitutional court sentenced Zuma to 15 months in jail for defying an instruction earlier in February to give evidence at an inquiry examining allegations of high-level corruption during his time in office.

However, prior to the December 2020 general elections, former President of Ghana, John Dramani Mahama who was then the flagbearer of the opposition National Democratic Congress(NDC) was accused by his political opponents of having links to a corrupt network in a case of kickbacks in the contract for the sale of Airbus military equipment to the Republic of Ghana.

Martin Amidu who was then the Special Prosecutor was expected to investigate Mahama on the alleged Airbus Scandal- but the former said his office lacks the resources to deliver and vowed not to arrest any corrupt official in an election year.

Speaking in an exclusive interview on political talk show,‘HardBall’ - hosted by Kwabena Owusu Agyemang on Accra-based Hot 93.9FM, Kofi Kpaloo stated that Martin Amidu failed to prosecute John Mahama because he lacked the expertise in executing the role as a Special Prosecutor.

According to Mr Akpaloo, “Martin Amidu was lying to have said that because it was an election year he couldn’t prosecute Mahama…It’s a lie …he just can’t do the job”.

Akpaloo emphasised, “Is the ANC not the government in power in South Africa? Why didn’t they say jailing Jacob Zuma would ignite chaos in the country? Mahama should’ve been jailed like Jacob Zuma”.

The Founder and leader of the Liberal Party of Ghana noted that irrespective of one’s political affiliation, he or she must be jailed if found guilty of any criminal offence.

Freedom of speech making disgruntled presidential candidate of so called LPG to ranting anyhow . Mahama is still better president than some of the people were seeing now.

Dear Kofi akpalu, you are citizen and have right to arrest any one you feel has flouted the laws. Go and arrest mahama

In Ghana, you can get away with any crime if you have great influence, like after every presidential term we have to analyze and evaluate their work according to their promises.they owe us that

Agreed. There must be a way of evaluating these politicians against their promises/manifesto. In the military, there is something they called Mission Debrief or After Action Reviews (AAR); The debrief is essential in military operations to pause and reflect on performance. It is a self-facilitated review of how a team performed and what will make next time better.

We need to incorporate some of this things into our system, so we dot all i’s and cross all t’s. Leaving nothing to chance.