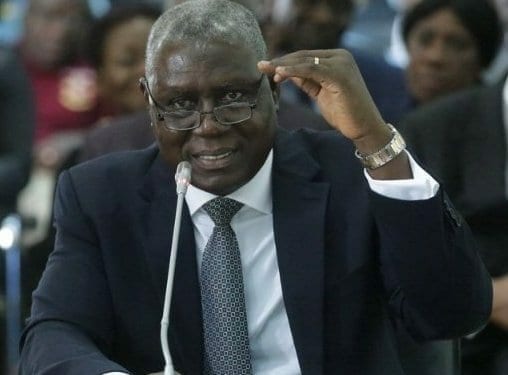 Kumasi-based private legal practitioner Akwasi Afrifa has maintained that he did nothing wrong in accusing the Chief Justice, Kwasi Anin Yeboah, of demanding a $5 million bribe from a client to influence the final judgment of a case at the Supreme Court.

The allegation was made by Akwasi Afrifa in response to a petition filed at the General Legal Council (GLC) by Ogyeedom Obranu Kwesi Atta IV.

The Chief Justice denied the allegations and reported lawyer Afrifa to the Criminal Investigations Department (CID) of the Ghana Police Service.

He also reported him to the Disciplinary Committee of the GLC.

According to the Chef Justice, he does not “know the plaintiff and has not met or seen him anywhere, except in the court room when he rises to announce his name when his case is called”.

In his letter to the CID signed by the Judicial Secretary, Justice Cynthia Pamela Addo, Chief Justice Anin Yeboah “asserts that he has had no personal interaction either with the plaintiff or his lawyer on this matter or in any other matter”.

“His Lordship further asserts that he has not demanded or received any money from any person to influence any decision in this matter or any other matter.”

On Monday, July 19, the cited lawyer voluntarily went to the CID.

After the almost six-hour closed-door interactions, lawyer Afrifa told journalists that his response to the issues is public knowledge and “I have come to finish my business”.

Hmm, maybe lawyer afrifa has some evidence to that accusation. You can’t just say someone is corrupt without proving beyond doubt that your allegations are true.

The cj has to also step aside for free and fair and independent investigation to be carried out on this matter. There’s no smoke without fire.

Such accusations should probably come with a concrete evidence and back room threatenings, if this true then who are we to be fighting this corrupt system because even if we manage to bring these people down bribery will set them free