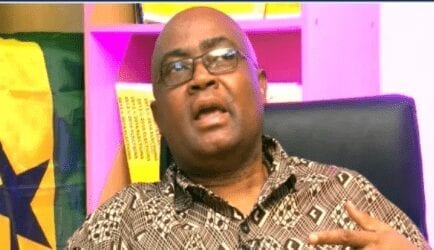 Pollster and Managing Editor of the Dispatch, Mr Ben Ephson has said that the suspended former Deputy General Secretary of the National Democratic Congress (NDC), Koku Anyidoho may challenge his dismissal from the party in court.

Mr Ephosn who said he was not surprised about the news of Mr Anyidoho’s suspension told Moro Awudu in interview on Tuesday July 27 that “If you look at what has been done concerning Allotey Jacobs and Atubiga I think that I saw it coming. I wasn’t surprised at all.

“I think that unlike Allotey and Atubiga, he may decide to challenge his expulsion in the law court.”

In pursuant to an earlier decision to suspend Mr Anyidoho, from the NDC, the Functional Executive Committee (FEC) has expelled him entirely.

By the decision taken on Tuesday, July 27, Mr Anyidoho is no longer to hold himself as a member of the NDC.

In a letter signed by General Secretary Johnson Asiedu Nketia to communicate the decision of FEC to him, the former Presidential Spokesperson was found guilty of the allegations of “misconduct” and “anti-party behaviour”.

The petitions were referred to the Disciplinary Committee for further action for which Mr Anyidoho was suspended.

“The Functional Executive Committee (FEC) acting in compliance of Article 48(1) of the NDC Constitution unanimously adopted the report and accepts full responsibility for your expulsion from the party,” the letter dated Tuesday, July 27, 2021 said.

“You are, therefore, by the decision of FEC expelled from the National Democratic Congress and for that matter you are no more recognised as a member the party and cannot carry yourself as such.”

Koku Anyidoho is expected to return any party property in his custody and shall forfeit any monies, dues or subscription fees he might have made to the party.

He can challenge the expulsion if he thinks he has been treated unfairly. He is a citizen and has the right to court and fair hearing. We can’t write the possibility of him going to court or appealing his sanction

Any idiot can go to and Koku Anyidoho will be one to go challenge his expulsion from NDC. He ostensibly and grossly violated the party’s Constitution, so what was he expecting, to be promoted to another rank in the party. The NDC lawyers are waiting for him in court.

Hehehe. Any idiot can go to court ampa. Let him try.