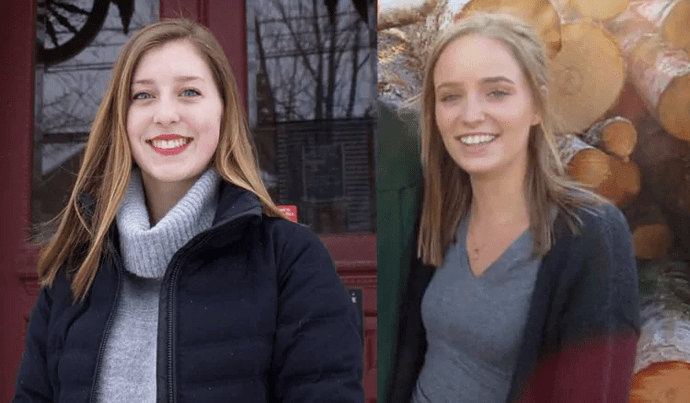 Lauren Tilley, left, and Bailey Chitty were on June 4, 2019 kidnapped at Nhyiaeso, a suburb of Kumasi

An accused person in the trial of the kidnap of two Canadian ladies has denied giving a caution statement to the police willingly.

Samson Agharlor said he declined to give information to the police because when he asked for a lawyer at the time of his arrest, the response from the police was: “kwashia, we will beat you together with your lawyer”.

They have pleaded not guilty to the offences.

Before the trial commenced, counsel for Agharlor had raised objections about the tendering of caution and charge statements allegedly obtained from the accused person.

He argued that the accused person was under duress at the time the police took witness statement from him for investigations. Excerpts of cross-examination

Counsel: Mr Nkrumah, I am putting it to you that Agharlor was tortured during interrogation; that is why you cannot identify him in a picture you yourself appeared in soon after his interrogation.

Witness: My Lady, the accused was never tortured before and after interrogation, and I am not in the photograph that is being shown to the court.

Counsel: I am putting it to you that Agharlor made you aware that he was not ready to give any information until he could make a statement freely where he will not be beaten, because when he asked for a lawyer, he was told that they’ll beat him with his lawyer. This was the response: “kwashia, we’ll beat you together with your lawyer”. I’m putting that to you.

Witness: That is not true, My Lady. Kidnapping plot

The facts of the case as presented by prosecution were that Agharlor, who had been in Ghana for some time, became friends with Yakubu in March 2019.

In the course of their friendship, Agharlor brought up the idea of kidnapping as a lucrative venture, an idea that was accepted by Yakubu.

Yakubu agreed to assist Agharlor in the kidnapping activity and even helped him to procure a pistol.

To bring their idea into fruition, the prosecutor said, Agharlor went to Nigeria in May 2019 and recruited Ojiyorwe and Omarsar to be part of the gang.

According to the prosecution, the three Nigerians, upon their arrival in Ghana, resided at Ashaiman for some time before they moved to Kumasi to meet up with Yakubu.

When they got to Kumasi, Agharlor, who was the leader of the gang, gave some money to Yakubu to hire a car, an apartment and also buy pistols and other items to enable them to carry out their kidnapping activities. Kidnapping of Canadians

On June 4, 2019, the gang, in a car, accosted the two Canadian ladies, who had hired the services of an Uber ride at their hostel at Nhyiaeso, a suburb of Kumasi, assaulted them and forced them into their own vehicle amid shooting.

They took their victims to their uncompleted building hideout at Kenyasi Krobo, another suburb of Kumasi and demanded a ransom of $800,000 from the families of the two ladies during their captivity.

The ladies were, however, rescued on June 11, 2019, by an operation led by the National Security.

You see , a police officer threatening someone to write a false statement or he get beaten, even his lawyer will be beaten. In law , if you Force someone to say or write some out of compulsion, that statement becomes null and void. They may be innocent after all.