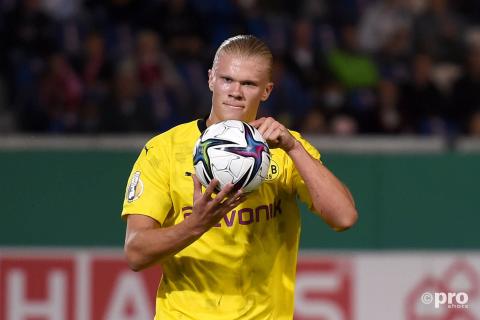 Juventus may have made one of the biggest transfer blunders in modern footballing history by rejecting the opportunity to sign Erling Haaland for just €2 million.
Giuseppe Marotta has admitted that he was presented with the opportunity to complete the deal by Molde when he was CEO of the Turin outfit.
Haaland subsequently signed for Red Bull Salzburg, where he excelled and won a move to Borussia Dortmund. He is now regarded as one of the hottest properties in world football, having scored more than a goal-per-game during his 18 months with the Bundesliga outfit.Little wonder, then, that Marotta has such regrets about turning down the opportunity to sign him for such a small fee.

Speaking at the Trento Sport Festival, current Inter CEO Marotta said: “One of my biggest regrets was the Haaland deal. I was Juventus CEO and we had the chance to sign him for €2 million from Molde."It was close. Now it’s impossible to see Haaland in Serie A - there’s no chance for Italian clubs to sign him next summer.”
Haaland is likely to be on the move next summer, with a clause in his Dortmund contract set to allow him to depart for around €90m.
AS reported on Friday that although he has been offered a new deal by BVB, he will not accept it. Nevertheless, Sport Bild had suggested he could spent one more year with Dortmund before moving on.
What will really put him out of reach for clubs like Juventus and Inter, though, are his wage demands. Agent Mino Raiola is reportedly asking for an annual salary of €50m for the 21-year-old hitman.

The likes of Real Madrid, Paris Saint-Germain or Manchester City are all likely to be willing to pay such a price to secure the Norway international’s signature.