American entrepreneur and billionaire, Jeffrey Preston Bezos, has confirmed that the Blue Origin New Shepard rocket ship that launched on a roundtrip mission into space on August 26 was successful.

In an Instagram post, the founder of Blue Origin and Amazon congratulated the team at Blue Origin and Amoako Boafo, the Ghanaian artist who was commissioned to paint three panels of the Blue Origin New Shepard rocket ship that launched into space on Thursday, August 26.

Amoako Boafo made history as the first Ghanaian to have his paintings enter space. 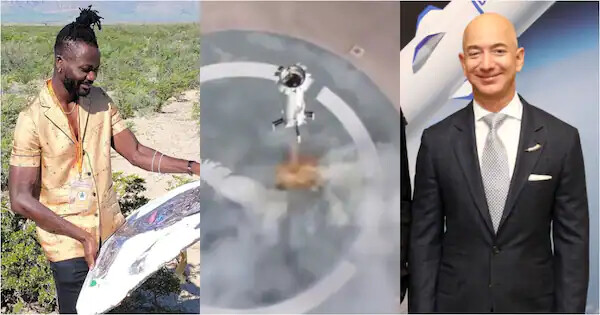 Titled Suborbital Triptych, the project was part of a partnership between the Jeff Bezos-founded aerospace manufacturer Blue Origin and the new art programme at Uplift Aerospace, curated by Jill Clark.

Message by the CEO of Uplift Aerospace In a statement issued by Uplift Aerospace, the chief executive officer, Josh Hanes established that ‘‘the purpose of the Uplift Art Programme is to inspire new ideas and generate dialogue by making space accessible and connected to human experiences,’’ said citinewsroom.com. Amoako’s profound strength, which is seen in his portraits and for the first Suborbital Triptych, brought another dimension to the power that propelled the New Shepard rocket into space.