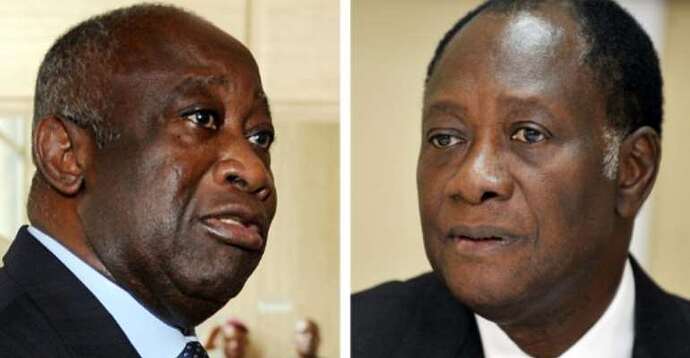 Ivory Coast leader Alassane Ouattara will meet his predecessor and former rival Laurent Gbagbo on July 27 for their first talks since Gbagbo’s return home after a nearly 10-year absence, the presidency said Wednesday.

The long-awaited talks are widely seen in Ivory Coast as a key to easing the country’s simmering political tensions.

The meeting will take place in the presidential palace, spokesman Amadou Coulibaly told a press conference, adding that the pair had been “in touch” by phone in early July.

Ouattara and Gbagbo headed rival factions in a post-election conflict in 2010-11 that claimed several thousand lives.

Gbagbo, 76, was arrested in April 2011 and hauled before the International Criminal Court (ICC) in The Hague to face charges of crimes against humanity resulting from the violence.

He was acquitted in January 2019, a decision that was upheld in March this year and enabled him to return home on June 17.

Ouattara, 79, has officially welcomed his return, seeing it as a key to easing the country’s entrenched problems.

Scores of people were killed last year in pre-electoral clashes with the police after Ouattara controversially unveiled his bid for a third presidential term.

He scored a landslide victory in the October 31 election but it had little credibility as almost all of the opposition boycotted the poll.

On Tuesday, Ouattara used the Muslim festival of Eid al-Adha to appeal for national healing.

“May the steps that have been taken for social cohesion, for reconciliation, continue to be made. May Ivory Coast continue to live in peace,” he said.

Gbagbo rose to prominence in the 1970s as a left-wing campaigner who fought against the one-party system that was installed in Ivory Coast after it gained independence from France.

He was jailed for almost two years and spent years in exile in France.

He became president from 2000 until 2011, but it was a time of rebellion, division and repeatedly postponed elections.

Despite his turbulent record, he retains considerable grassroots support, and his defenders portray him as a charismatic champion of the poor and oppressed.

Analysts have been closely watching the interaction between Ouattara, Gbagbo and former president Henri Konan Bedie, 87, who have dominated Ivory Coast’s political stage for decades.

On July 11, Gbagbo and Bedie – who were also once rivals – said they were united in the goal of forging “final and sustainable peace” in the country.

An issue that has garnered little attention is that Gbagbo was convicted in absentia of “looting” the Central Bank of West African States (BCEAO) during the 2010-11 conflict, and sentenced to 20 years in jail.

Authorities have hinted that this sentence will be lifted.

Actually Gbagbo government was one hell of a government, he’s so corrupt, he was willing to take the seat for the rest of his life , who does that. Hope this helps them as a country,

At the end of the day , unity is the only way to build a country. These two politicians have caused a lot havoc and killing in ivory coast and posterity will not forget and forgive them. They will pay for killing innocent civilians because of power

We cried for peace but the two of you didn’t listen, you killed dozens of innocent civilians and people in the villages. Some have flee to Ghana and Togo or other African countries for cover. Now you are here to talk about what, shameless people

Greed is very common with African Leaders. Power is ‘sweet’ but it is also transient. They will anything to stay in power. It’s good they see peace to be a priority. Hope it will continue even after the meeting.