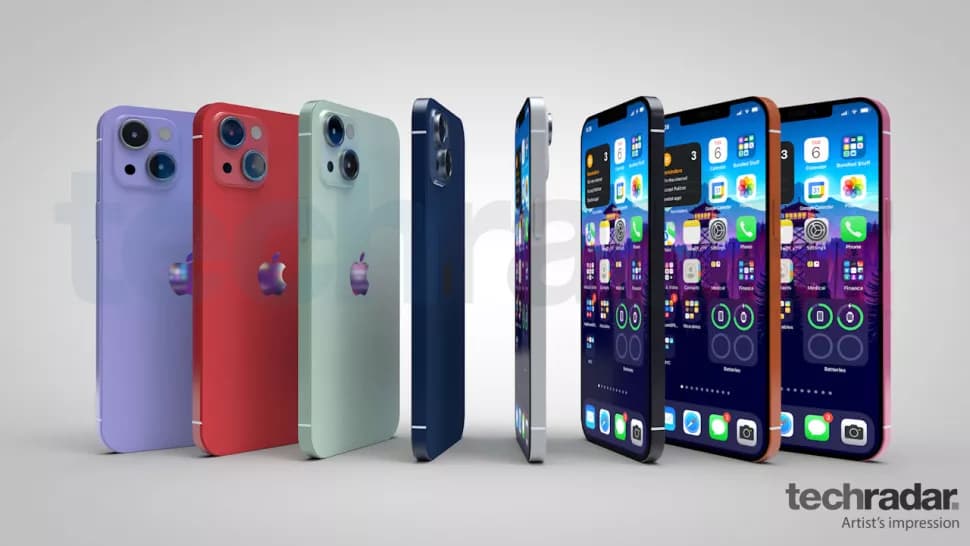 Our artist’s impression of the iPhone 13 leaks so far (Image credit: TechRadar)

With Apple’s new iPhone 13 series release date heavily tipped to be in September, it’s likely just weeks at most until the phones launch - and we’ve been hard at work rounding up and cutting through the key iPhone leaks.

New iPhone rumors have been springing up from a variety of sources for the last few months, and we’ve now got a clear picture of many of the likely specs of the iPhone 13, iPhone 13 Pro, iPhone 13 Pro Max and iPhone 13 mini.

We also have a good idea of the likely design of these phones, and have seen numerous leaked images. For those of you who are light on time we’ve cut down the rumors into a handy, bite-sized portion below, while further down you’ll find tons more depth where we explain everything you have to know about the new iPhone range.

The iPhone 13 probably won’t be notch-less, despite such a phone appearing in Ted Lasso. It probably won’t offer satellite connectivity either despite an earlier leak suggesting it might.

iPhone 13 release date: September 2021 is likely when we’ll hear about the iPhone 13, with most sources pointing to September 14. We’re not certain of that date yet, but it looks the most likely.

Design: Little is expected to change from the iPhone 12, but it seems the company will be changing the design of the rear camera. It’ll seemingly have a diagonal lens arrangement on the two cheaper phones, but the design seems otherwise largely set to be similar to last year’s handsets, albeit with a slightly smaller notch.

Colors: Apple may debut some new shades with the iPhone 13 series, and two rumored versions are pink and orange. Alongside those, we expect to see similar shades to last-gen, such as purple, black and white.

Display: Screen sizes and resolutions are expected to stay the same across the range of iPhone 13 products, but both the iPhone 13 Pro and iPhone 13 Pro Max are heavily rumored to debut 120Hz refresh rates. That means the image on these screens will be smoother than previous iPhones. Plus we’re expecting an always-on display on each handset, too.

Camera: Apple is expected to be tweaking the camera on the iPhone 13 series, and the two Pro handsets may get an upgraded ultra-wide shooter. The iPhone 13 Pro may also get an upgraded telephoto camera, plus some leaks suggest LiDAR could be present on all four models so you’ll have improved depth perception, though more recent leaks don’t mention this, so don’t count on it. Video recording software improvements are also expected, including a new Portrait mode.

Specs: The A15 chipset will likely power each of these handsets, though current reports suggest this won’t bring a huge power boost. It’s also heavily rumored that Apple may bring out a 1TB iPhone for the first time in 2021, so that’ll allow for the largest iPhone sizes ever.

Battery**:** If the biggest iPhone 13 battery leak is correct, you can expect a larger battery inside 2021’s phones. These are expected to be notably larger, with the iPhone 13 expected to offer a 3,095mAh cell compared to the iPhone 12’s 2,805mAh. What will that mean? Expect a longer lasting iPhone 13 than your previous iPhones.

iPhone is on the run. I love the design of iphone 13. It looks like it’s taken the model of iPhone 5, 5s. This made it even more cooler. I’ll get one soon but the price dier, ano reach there yet.

This is a great improvement and my favorite feature of iPhones. It’s frustrating when your battery

gives up on you when you needed it the most. I’m an iOS guy and I love everything Apple.