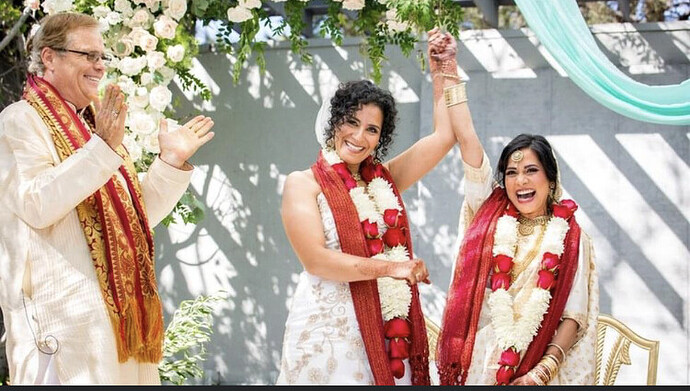 Excluded by traditional marriage ceremonies, Indian-American gay couples in the US are finding new and unique ways to solemnise their unions, reports Savita Patel.

When Sameer Samudra and and Amit Gokhale decided to marry according to Hindu custom, the couple faced an unexpected hiccup: they couldn’t find a priest to do the ceremony.

“We wanted a Hindu wedding, but so many pandits [priests] said no. I was agonised when one of them quoted an exorbitant amount just because I am gay!” said Sameer, who lives in North Carolina.

Unwilling to have “the energy of a reluctant priest” at their wedding, the couple improvised.
“One of our friends learnt the basics of being a priest and we chose Hindu rituals that made sense for a same-sex wedding,” Sameer said.

So many Indian-American couples dream of a big fat Bollywood-style wedding, complete with traditional rituals. But that’s easier said than done for gay couples - even in the US where same-sex unions were legalised in 2015.

Temples refusing to host same-sex weddings, priests hanging up on their phone calls or unwilling to tweak the ceremony to suit them and, in some cases, not even showing up on the day of the wedding - these experiences have driven Indian-American gay couples to fall back on friends and well-wishers to create unique ceremonies rooted in their culture.

Sapna Pandya, for instance, became a priest herself although female priests are virtually unheard of in Hinduism.
She did it because of the opposition she and her Pakistani Muslim wife, Seher, faced when they wanted to get married the traditional way. 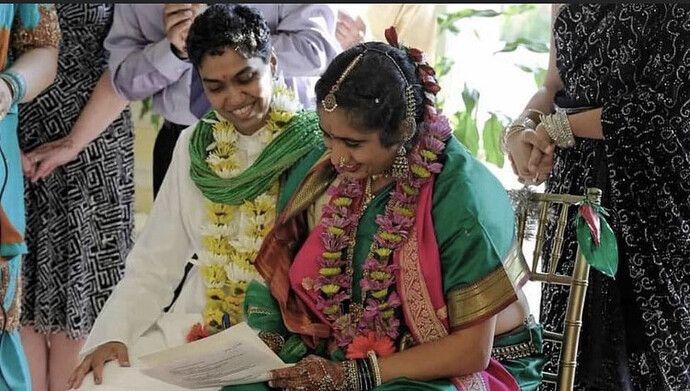 image750×426 121 KB
Ms Pandya, who runs a non-profit that advocate for minorities, said she now mostly presides over LGBTQ weddings.

There are a handful of priests like her - vowing to eliminate misogyny and patriarchy, they have taken this on alongside their professional careers. This is a challenge to traditional priests who largely believe that marriage is only possible between a man and a woman.

Abhishek Sanghavi is a Jain priest who works as a tax consultant - his videos from 2019 of Vaibhav Jain and Parag Shah’s gay Jain wedding inspired many gay couples worldwide.

“They were nice young men looking for a Jain wedding. Compassion is the foundation of Jainism. All religions teach love,” Mr Sanghavi said.

Dr Shukavak Das agrees. A Christian-turned-Hindu with a PhD in Sanskrit and Indian Studies, Mr Das is head priest of the Lakshmi Narayan Mandir in LA. He has formalised thousands of weddings.

“I am not aware of any place [in Hindu texts] where it says it [same-sex unions] is not to be done,” he said.

Recalling a recent gay wedding where he officiated, he added “The elderly parents of the groom thanked me with tears in their eyes ‘for giving our son a place in our culture’. We are all souls in this world - sometimes we have male and sometimes female bodies, but we are all equal spirits.”

Mr Das also lifted the spirits of Monica Marquez and Nikki Barua at their lesbian wedding.
“Both Monica and I are very grounded in our cultures. From an early age, we had dreamt of a traditional wedding,” said Ms Barua, an Indian-American entrepreneur and author.

Her partner is Mexican-American. MsBarua said they had trouble finding a priest but their dream wedding finally happened thanks to Mr Das. “He never made us feel awkward. It felt like a natural experience and it was beautiful,” she said. “It made us feel like we belonged.”