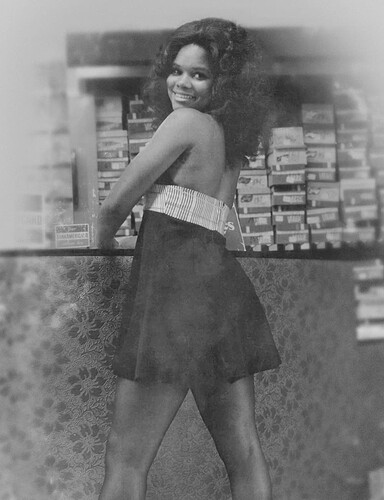 'WE’RE NOT CHUNKS OF MEAT’ I had two kids by 14 and became a prostitute who slept with 1,800 men a year to help feed them – I cried every time
AFTER getting into the stranger’s car, it wasn’t long before tears trickled down young Brenda Myers-Powell’s freshly dolled-up face.

It was the first time the teenager was going to have sex for money, after she was told to earn cash to support her two young daughters because there was no food left in the house.
With a $3.99 (£2.90) two-piece dress, cheap plastic shoes and orange lipstick, which she thought made her look older, the 14-year-old met her first client on Chicago’s West Side.

Unfortunately, abuse at the hands of men was nothing new for Brenda.

Brenda’s mum died when she was a baby so she was raised by her grandmother.

But her grandmother’s drinking problems meant she’d often pass out drunk and with no responsible adult around, Brenda was molested from the age of four by her grandma’s friends.

That first night on the streets earned her $300 (£218) from five clients and set in motion the destructive path that led her to work as a prostitute for 25 years.

During that time, she was locked in wardrobes for days at a time, shot at five times, nearly beaten to death and raped by pimps before she managed to escape. Brenda, now 64, has published her memoir Leaving Breezy Street to show the reality of sex work and that victims of the trade are “not dumb chunks of meat”.

She told The Sun: “I got tired of prostitution being described in the wrong way – it was absolute bull*** because pimps glamorise it and make it seem like a type of employment for girls
Source: The Sun

But I don’t understand why some people can’t just help without demanding anything in return. It’s sad to hear stories like this . For young girls to do this just to better their lives

Sad to say hmm let’s be helpful to others

Bro this is something that’s so sad to hear. There is a prostitution joint right at Pokuase and you ought to see how this young girls are engaging themselves into the act. I sometimes wonder if there isn’t a single person out there or a family member who is financially good to help these young girls out of the street. God help them

It’s my prayers too and looking at her situation she was just 14 years old with two kids and she was asked to go out there to bring in something for her two kids and at that age she didn’t know what to do but to go into that act. Many all over the world are into this act and I can say that most of them don’t even know what their are doing. It’s just sad

Sad to say hmm let’s be helpful to others

Life can be drastic and unforgiving. Men should learn to help without any attachment. Let love lead.

Life can be drastic and unforgiving

You’re right bro. This is the reason why one point in time you can do something and it keeps hunting you down all the rest of your life. Love is the only thing that can save you and when you love everyone you wouldn’t have to sleep with them before you extend your helping hand. Love is the only thing we need to help those poor women out of such an act

Guys now a day always help people just to also get something. But blessings are those who extend their hand and give to liberal without any alter a word🙏

You’re right. We need to help others not because of what we will get from them, for the good we do today comes back to us in so many ways.

. The article said nothing about STDs or STIs coming into the picture along the line.
Let’s just say she had her way through that. I hope a lesson is learnt.

I tell you bro … You really did serious analysis

. The article said nothing about STDs or STIs coming into the picture along the line.
Let’s just say she had her way through that. I hope a lesson is learnt.

A very sad story indeed. Being just 14 years of age with two kids to cater for without the help of anyone. She was so fortunate she didn’t contract this STDs or STIs. That is why she wrote a memoir to show the reality of sex work and everything involve that’s the likeness to get infected with STDs or STIs whiles engaging in sex work.

It’s so serious. 1800 men in a calendar year is beyond imagination. You can imagine the total number of men she slept with in the 25 years of sex working. Her story is so sad to read

hmmmm…this world is very difficult to live in oooo. surviving no be easy oo ei

Survival consist of a whole lot of things that we sometimes don’t wanna do but we need to survive and that pushes some of us to risk it all in other to survive.

Ashawo life no be survival bro. There are other avenues we can legitimately hustle and and make earns meet. We can’t normalise women sleeping with Soo many men in the name of survival, that’s a low life

Ashawo life no be survival bro. There are other avenues we can legitimately hustle and and make earns meet.

I’m not in favour of sex work but what I’m trying to say is, sometimes because of survival many does so many things which are mostly frowned on by the society for the sake of survival. Sex work, robbery and frauding others are not acceptable. Some classify it as work but it’s not. Work generally means doing something legally to make earns meet.