I really like the way 'Adolf Hitler' Akufo-Addo is stealing, he's an expert in stealing - NDC's Joshua Akamba 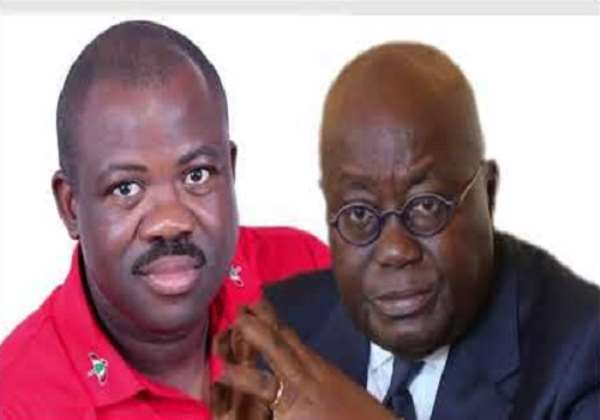 The National Organizer of the opposition National Democratic Congress(NDC) Joshua Akamba has accused President Akufo-Addo and his government of looting the public purse.

Speaking in an exclusive interview on political talk show, ‘HardBall’ hosted by Kwabena Owusu on Accra-based Hot 93.9FM, the NDC scribe who was asked to reveal one thing President Akufo-Addo has done which the latter must be commended for, said, " If you are looking for my honest truth - then it’s stealing…The only good thing Akufo-Addo has really done which must be commended is stealing…Oh yes…stealing.I really like the way he steals…He has really done well in that".

Mr Akamba stated," Akufo-Addo’s administration is experts in stealing…they’re thieves…and that is what they’re."

The outspoken National Organizer of the NDC added that," when Bawumia was lying, were you (journalists) not the same people who labelled him 419? I was the first person to call Bawumia 419 and I am the first to call Akufo-Addo Adolf Hitler".

Joshua akamba is speaking just because he had access to a microphone. There has never been an evidence that the president of the land is corrupt. Perceptions are created by the opposition just lure the public into hating the government.

This is a bad precedence, because akamba and his NDC will come into power and such baseless allegations will be doubled against them.

I disagree sir. The president isn’t accused of corruption by the opposition NDC only but by his own appointees and party people including Martin Amidu who even called the president “the mother serpent of corruption”. Let us not make this about NDC.