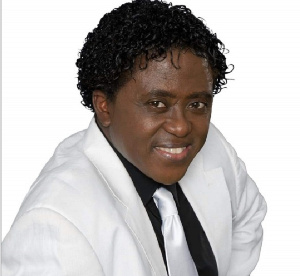 • According to him, he traveled all the way to Ghana to settle down with the TV presenter

After being granted a presidential pardon and choosing to do God’s work after he was convicted of the murder of a taxi driver in 1995, Gemann has disclosed his intention to settle down with popular TV presenter, Delay.

Gemann in an interview with Kingdom FM revealed that he left the United States to Ghana purposely to find true love; adding that Delay is the
chosen one.

Unclear what exactly his relationship with Delay looks like, Gemann emphatically stated that;

“Marrying Delay is one of the biggest plans I intend to achieve. After I lost my ex-wife, I have not married any other woman. I traveled all the way to
Ghana to purposely marry Delay."

Recalling one of the precious moments he had with her ex-wife, Gemann said prior to her death she led him to Christ.

“At the time I met my ex-wife, I wasn’t a believer but she prophesied that I’ll one day sit closer to her in church and it came to pass. Before she died,
I had the privilege to sit beside her,” he told Fiifi Pratt.

Earlier in an interview with TV3, Gemann after spending 14 years in prison bemoaned the terrible state of prisons in the country.

According to him, what is meant to be a rehabilitation system is doing society more harm than good.

Hurry, it could be yur chance

Is that where your appetite has reached? Eii Mr Gemann paa. Are you sure delay will settle with an ex convict, especially when your were jailed for life for murder? Okay , love is blind so let’s see if delay will walk down the Isle with him soon😎

Hehe, my fingers are crossed as well, waiting to see what happens next.

He says he came all the way from America just to marry her. In other news, “Gemann had sent Fiifi Pratt to approach Delay on his behalf to smoothen the process. Gemann added that everything including the ring is set and he is ready to settle down.”