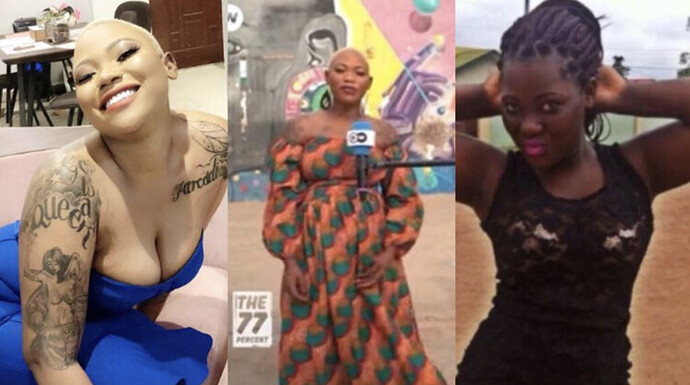 The Snapchat ‘slay queen’ who proudly bears the tag as a prostitute and a pimp in Ghana spoke about what pushed her to bleach her skin. In the interview with Edith Kimani, Farcadi shared the benefits she has derived from bleaching her skin.

Explaining herself on the 77 Percent show titled “how can we decolonize beauty standards?” Queen Farcadi noted that she bleached to attract more men. “Basically I thought of lightening my skin to fit into the criteria of girls the men are interested in,” she said. 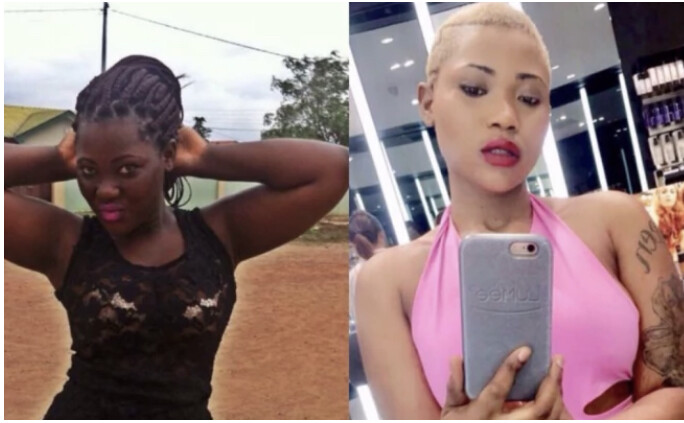 Farcadi before and after bleaching

“For the attention and everything, for social media when you are a bit lighter you get more attention,” she emphasized.

Speaking about the impact after changing her complexion, Farcadi added that “after the skin lightening, I turned into Farcadi, before the skin lightening I was Enyonam. So that’s the changes I had and life was pretty good, got famous, got the attention from the men, you get deals, maybe model contracts and all that”.

In the video below, she claimed that in Ghana, light skinned women get paid more compared to women with dark skinned tone. “You will get the job but the payment there’s difference in it”.

This isn’t the first Queen Farcadi has opened up about her lifetyle and making money from sleeping with men. The mother of one once revealed that "I have slept with uncountable men … I don’t even remember some of them.”

She mentioned some states in Nigeria where she has slept with men for money. According to her, she has had sexual affairs with multiple men in Abuja, Lagos and Delta State in Nigeria. “I have slept with men across all continents – from Abuja, Lagos, Delta, etc,” she claimed.

Queen Farcadi on the Delay Show

The 26-year-old Ghanaian socialite known for her commercial sex business and open-mindedness across her social media platforms also made headlines when she sat on Delay show.

During the interview, Delay put it to her that she is a witch because nobody without a spiritual backing can do what she does. “[I know that you are witch]

However, Queen Farcadi, who is a mother of one, denied possessing any witchcraft spirit but admitted that she consults spiritualists for her protection and added that[ she also attends church.

Farcadi or whatever her name is should bow her head in shame for saying that. She makes women look like sex objects by her uterances and attitude. Only men without vision can get attracted to bleached ladies; perhaps for sexual satisfaction only. I’m ashamed of her

Hmm
You know, women like this have no shame. They behave as if they have no parents and no home training

Speaking about the impact after changing her complexion, Farcadi added that “after the skin lightening, I turned into Farcadi, before the skin lightening I was Enyonam. So that’s the changes I had and life was pretty good, got famous, got the attention from the men, you get deals, maybe model contracts and all that”.

Ooh I see , so you bleaching because of men and fame. You see why some people don’t take some ladies serious? Now it’s okay for a prostitute to come out public and be corrupting and advertising their immorality. How did we get here? Home training or poverty?