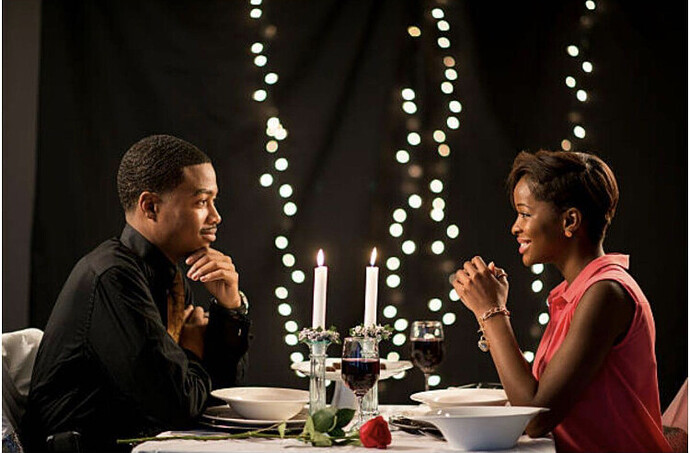 A lady named Christy has taken her predicament to social media in order to find a quick remedy to a confrontational situation she finds herself in.

Sharing her story, Christy said when her boyfriend proposed marriage to her, her joy knew no bounds after which he arranged so she could meet his parents and that was when she encountered what has now become her nightmare.

Christy admitted to having had a fling with her suitor’s father during her second and third year in the university.

Sharing her story, she wrote:
“I am christy and I am 28 years old. I’ve been dating my boyfriend James for one year now. James is every woman’s dream man and he literally worships the ground I walk on. My Joy knew no bounds when he asked me to marry him last month. Of course I gladly accepted and 7 days ago, he officially introduced me to his parents as his wife to be .

When we got to his father’s house, I got the biggest shock of my life. I discovered that his father happens to be someone I once had a fling with in my second and third year in the university. I could see the terrible look on his father’s face when his son introduced me as the lady he wants to settle down with.

Sincerely since that day I’ve not been myself, now am confused. Should I open up to James and tell him I once had affair with his father? Truth is, I’m afraid he will not give us his blessings or worse tell James before me.

Please I am in a fix and really don’t know what to do next. I am scared he might stop his son from marrying me.
How do I handle this please?” 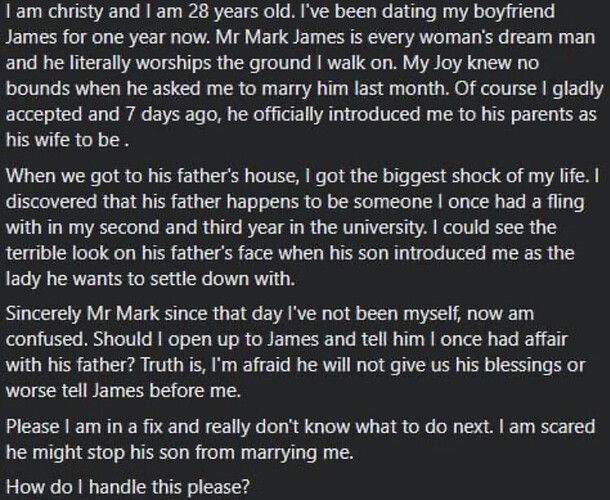 She chose to date older men back in school but decided to settle down with a younger one. Some of our ladies herh, them dey hia lashes paaa. Honestly, the saying that “you reap what you sow” still stands so all the best sorting this out. A lesson to be learnt: our dear ladies.

This is how you pay for your sins. Though I’m not in a position to judge, a young lady at 28 should focus on building a future career than chasing old men and people’s husbands. Leave that shameful relationship before your fiancé finds out your dirty past.

My dear sweet Christy, you see, everyone has a past; a good past or dirty past. There’s little you can do about your situation now. Just forget the past and marry your boyfriend wai . If they fool, eat all of them.

Tell James the truth and allow Karma to decide your faith.

I perfectly agree with you @Emp_Sel . Asem mp3 nnipa, nnipa na )p3 as3m. As a young person, you should set goals for yourself and work towards achieving them. If you want to marry a virgin, you should be one yourself.

No long talk charley. It has become a norm in our society. Because of some ‘easy’ cash, they chose to sleep around. Setting SMART goals should be our focus like you said.