How can corruption Joy FM relay the truth, If there'll be any disturbances in Ghana, it’ll arise from Joy FM; I'll expose them — Ken Agyapong 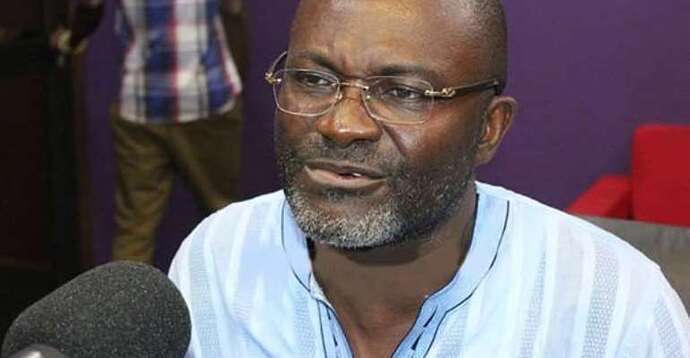 Member of Parliament for Assin Central MP Kennedy Agyapong has taken the fight to Multimedia Group for accusing him of allegedly threatening harm on the life of a reporter of its Kumasi-based Luv FM’s Erastus Asare Donkor.

He said Multimedia Group is bitter because his party no longer takes care of its staff.

Ken Agyapong is alleged to have threatened the life of Multimedia’s reporter, Erastus Asare Donkor over comments the latter made during his appearance before the Ministerial Committee probing the disturbances in Ejura in the Ashanti Region.

The MP’s comment has attracted public condemnation with an official complaint being lodged at the Ashanti Regional Police Command by the Multimedia Group, owner of Kumasi-based Luv FM.

“I am surprised at how shameless Joy FM is.

“Before Joy FM will have the moral right to report me, it should first write an apology letter to the families that lost their relatives in the Ejura incident, as well as the individuals who sustained various degrees of injury.

“I stand by my words: they are all corrupt. Kwasi Twum claims he did not tell me in my office that the staff of Joy FM is threatening to sabotage the government because we no longer take care of them. I dare Kwesi Twum to come again.

“If Joy FM pushes me to the wall, I will expose all the information I have gathered about them. I’m going all out. You cannot use the media and police to silence me. I will continue to speak the truth. How can a media house be this corrupt at the detriment of its responsibility to relay the truth? If there will be any disturbances in the country, it’ll arise from Joy FM”, he said.

The Assin Central lawmaker chided his own party for sidelining him on the matter.

“I am also disappointed in NPP because when Muntaka alleged that the Supreme Court judges are corrupt, no one suggested that he should be dragged before the Privileges Committee.

“You all can go ahead to expel me from parliament if you so wish. Do you think I rely on what I make as an MP? No one can silence me."

As for loud mouth Kennedy Agyapong, every one in this country who doesn’t side with him is corrupt. He is now accusing a big media conglomerate as multimedia as corrupt.

I don’t really blame him cos the same multimedia made also made of Adom TV will invite him to their morning show to come spew gibberis.

If war will come into this country, this mp will bae part because of his ungarded uterances on in the media.

He is also corrupt just that he’s rich to kill any story.