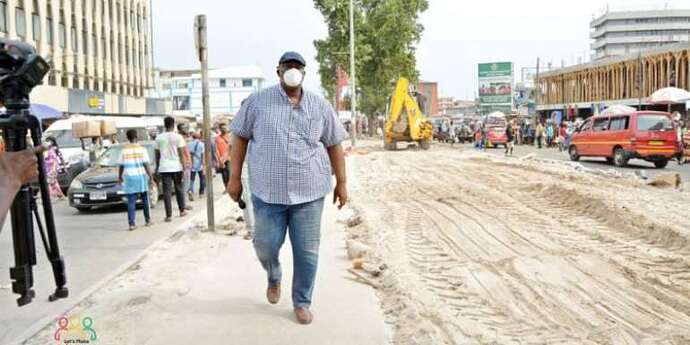 The Greater Accra Regional Minister, Henry Quartey, has cautioned drivers and transport operators who use bus stops as lorry stations to desist from the practice since it contributes to vehicular traffic in the city.

This follows an operation by the Accra Metropolitan Assembly taskforce on Wednesday to arrest drivers for continuing to use the pavement at the new Pokuase Interchange as a loading bay contrary to a directive from the Greater Accra Regional Minister, Henry Quartey to stop the practice when he toured the city months ago.

The Regional Minister in collaboration with Roads Minister, Kwesi Amoako-Attah who was on their usual sanitation inspection of the city said the use of bus stops as loading bays also contributes to the mess in the city hence the need to curtail such activities.

At the new Pokuase Interchange, Henry Quartey engaged traders whose activities also contribute to filth at the spot and directed that they be provided a bin for the waste they generate to avoid prosecution.

When this reporter got to the new Pokuase Interchange the Minister ordered the removal of items and structures on the shoulders of the road.

Ghanas best regional minister at the moment. He’s working. He’s the true son of Ga land. A mister no nonsense man. I hail you. Continue making Accra a disciplined and clean place. Sack anyone or anything “sackable” if that what will make the place okay