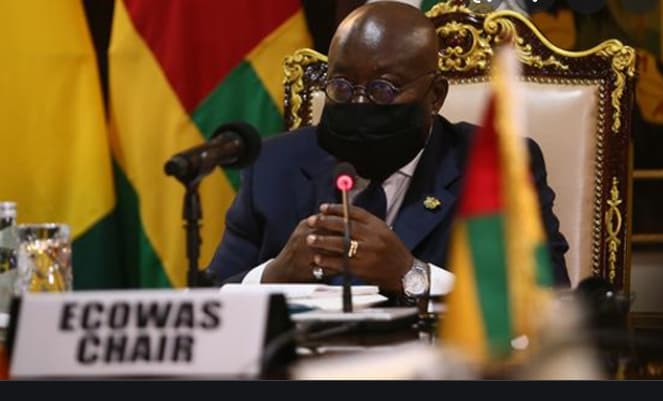 The Chairperson of the Economic Community of West African States (ECOWAS), President Nana Addo Dankwa Akufo-Addo will chair a virtual emergency meeting with the regional bloc today (Wednesday, September 8, 2021,) to discuss the happenings in Guinea.

According to the Director of Communication at the Presidency. Mr. Eugene Arhin, President Akufo-Addo will lead his colleague Heads of State to address the coup that has led to the moval of Alpha Conde as the president of Guinea.

“The president will chair an emergency virtual summit of heads of state and governments of the Economic Community of West African States (ECOWAS) basically to reaffirm the long term held belief that the ballots and not the bullets should be the only legitimate means of effecting change in the political leadership of any country within the ECOWAS community.”

He said the meeting will try to find a lasting solution to the Guinea crisis.

The ECOWAS has earlier demanded that the members of the Guinean defense and security forces who embarked on the coup in that country return it to constitutional rule.

The regional bloc also called for the immediate and unconditional release of President Alpha Condé and all other persons in detention following the coup d’etat.

President Akufo-Addo, who made the demand in a statement reaffirmed ECOWAS’ objection to any unconstitutional political change.

“ECOWAS demands respect for the physical safety of the President of the Republic, Professor Alpha Condé”. We ask the Guinean defense and security forces to remain in a constitutional posture and express our solidarity with the Guinean people and their government,” it added.

This is the second time President Akufo-Addo has had to ask illegitimate governments to return to constitutional rule since he assumed office as ECOWAS Chairman a year and a half ago.

Upon the intervention of President Akufo-Addo and a mediator, Mr. Goodluck Jonathan, the junta in that country agreed to form a unity transitional government.

In May this year, however, Col Goïta again seized power from the interim President, Bah Ndaw, and Prime Minister Moctar Ouane, accusing them of failing in their duties and seeking to sabotage the country’s transitional effort.
ECOWAS subsequently met in Accra to expel Mali from the regional bloc, including the application of sanctions.

The Guinean situation is, therefore, another litmus test for President Akufo-Addo to help bring calm to that country and also ensure that it returns to constitutional rule.

I believe from what I heard from the soldier that addressed the nation was, he did it for the people and he was ready to give power back to the people. But it is rather unfortunate that their republic has being destroyed because of an individual’s love for power and selfish gains.