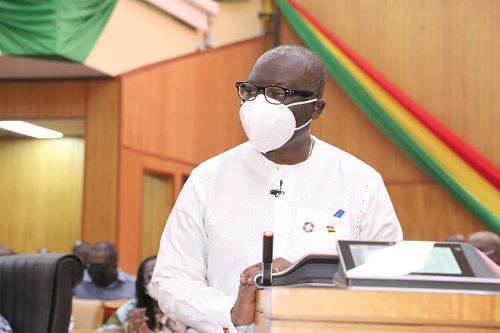 Total petroleum receipts which includes proceeds from liftings and other petroleum receipts received by the government for the first half of the year amounted to US$330.3 million, Finance Minister, Mr Ken Ofori-Atta has disclosed.

According to him, “of these, proceeds from the sale of the volume of crude oil liftings consisting of the 58th and 59th from the Jubilee field, the 7th from the SGN field and the 18th from the TEN field, totaling 3,840,517 barrels, contributed US$232.24 million.” Laying the 2021 Mid-Year Budget review before Parliament in Accra Thursday, July 29, Mr Ofori-Atta said out of the total receipts, an amount of US$98.34 million was transferred to the Ghana National Petroleum Corporation (GNPC).

This is made up of Equity Financing Cost of US$60.9 million and the GNPC’s share of the net Carried and Participating Interest of US$37.5 million.

Again, he said an amount of US$76.8 million was transferred into the Ghana Petroleum Funds (GPFs), out of which the Ghana Heritage Fund (GHF) received US$23.0 million, while the Ghana Stabilisation Fund (GSF) received US$53.7 million. The Annual Budget Funding Amount (ABFA) account received a total of US$155.2 million, out of which US$21.7 million was allocated to the Ghana Infrastructure Investment Fund (GIIF), leaving a net ABFA of US$133.5 million to fund projects in specified priority sectors of the economy.

Giving a broader overview of the petroleum sector, he said “Mr Speaker, discussions with prospective investors are ongoing to promote Ghana as an attractive destination for investment, technology and a hub for refined petroleum products in West African sub-region through the implementation of the Petroleum Hub project. The Ghana Negotiation Team (GNT) has resumed negotiations with four companies to discuss issues pertaining to the negotiations of petroleum agreements.”

He said the ENI Group recently made a significant oil discovery in Block 4 offshore Ghana, with an estimated deliverability potential of 5,000 barrels of oil per day, similar to the well already in production from the Sankofa Field. The Finance minister said further studies carried out by Tullow have revealed that the Greater Jubilee field and Tweneboa-Enyenra-Ntomme (TEN) fields have additional gas reserves of 1.7 Trillion Cubic Feet (TCF) and 2.7 Billion Barrels of Oil (BBL).

“Mr Speaker, as part of the strategic objective of creating an energy hub and a “Borderless Sub Region” for unrestricted flow of electrical energy, GRIDCo is undertaking transmission system improvement projects aimed at enhancing reliability of power supply and improving power export. The Kumasi-Bolgatanga transmission line project is expected to be completed by end of August 2021.”

Additionally, the Finance minister said to improve power quality in Kumasi and its environs, GRIDCo will commence the installation of a 50MVAr STATCOM device at the existing 161kV Kumasi Substation.

He said to ensure that power is affordable for industrial, commercial and residential use, the renegotiation and restructuring of Power Purchase 54 Agreements and Gas Sales Agreements (PPAs and GSAs) in the energy sector is progressing steadily.

“Discussions on the refinancing and restructuring of the Cenpower Generation Limited project are expected to reach financial close by middle of August 2021.

The CENIT Energy Limited has agreed to convert its power plant to a tolling structure, as well as reduce its tariffs, resulting in significant savings to government.”

Mr Ofori-Atta said all other PPA negotiations are proceeding with additional savings for the government expected by end of the year, once all relevant transaction documents have been agreed and executed. He explained that these negotiations further underscore the government’s firm resolve to execute a structured, transparent and objective sector restructuring process, all with a view to ensuring a sustainable, fair and balanced energy sector for all stakeholders.

The Finance minister also indicated that the development of the Pwalugu Multipurpose Dam and Irrigation Project was underway.

“This project aims to improve stability of power supply in the northern part of the country.