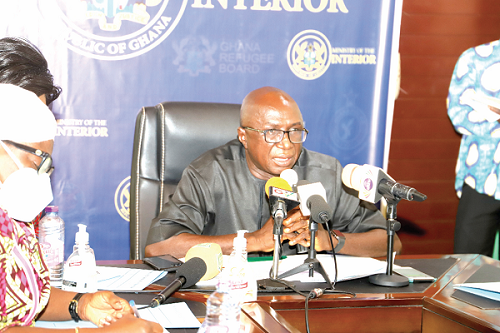 Mr Ambrose Dery the Minister of the Interior addressing the media after the event. Picture: GABRIEL AHIABOR

The government is committed to ensuring that security personnel in the country are accountable for their actions, the Minister for the Interior, Mr Ambrose Dery, has said.

That was why there had been recent talks about body cameras to give evidence of what happened in every situation, he explained.

Mr Dery said this during an interaction with journalists after taking delivery of the Ejura Committee Report last Tuesday.

“But at the same time, we must recognise that these security personnel have put their lives on the line for this country and we should acknowledge that.

“This country’s security agencies have gained international recognition and they do a lot of good work,” he added.

Commenting on police/military operations towards ensuring public safety, he said the country had depended on collaboration among the military, the police and other security agencies for long.

“They have had 27 separate collaborative efforts and operations over the years and Ghana remains an oasis of peace in West Africa. So there is something that is good about their collaborations,” he said.

Having said that, Mr Dery indicated that the government took very serious measures when it thought there was a mishap that was attributable to security personnel, saying: “You saw an example in the Wa situation when the incident took place. Within 24 hours, the Army Commander was in Wa apologising to the people, and within a week action was taken, with disciplinary measures against all those who were found to be culpable.”

The Interior Minister said Ghana’s accolade of being the second most peaceful country in Africa belonged to every citizen, since “it is the populace that gives us that support”.

“We will correct the things that need to be corrected and go ahead to do introspection from time to time to see where the mistakes are and correct them,” Mr Dery said.

On the Ejura Committee Report, he said anybody who did not have confidence in it did not have any basis for that.

“So it is premature and prejudicial for anybody to do that. At the appropriate time, the report will be published for all of us to see,” he emphasised.

Security, the Interior Minister said, was above politics, saying all should support the security in the execution of their work.

The security services do not need any body cam right now. What they need is good attitude. Not kits. We want to copy the west when it comes to security but we don’t want to put in the work that made them the best. If Ghana were to be a country in Europe or the States, the likes of Ambrose Derry and Dominic Ntiwul would have resigned by now for their failures, yet we are here condoning mediocrity.

Mr . Abrose Dery is not on top of job as the interior minster. There are too many police indiscipline in the system in recent times. What is he doing about it. Police service and the ministry does not account for the bad actions of their personnel. I hope he puts what he says into action and begin punishing unscrupulous police officers

The interior minister is just a joke and playing with our minds. He should’ve been sacked from that office since police scandals started somewhere last month. He can’t do the job of keeping our internal security. Officers of the police service kill and beat civilians and go Scott free. Nothing so far has been done to any of the numerous police offenders.