Ghanaian cook causes traffic as he proposes to girlfriend inside roundabout 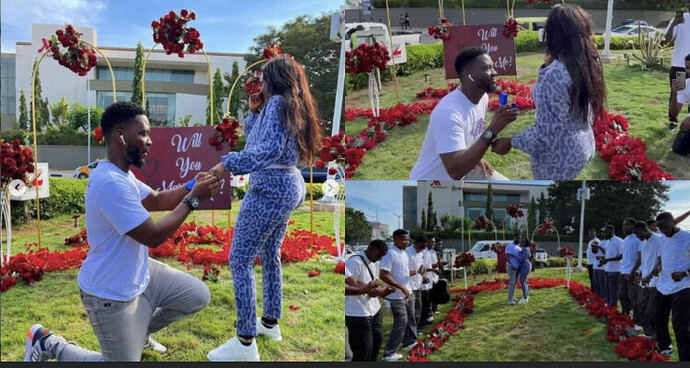 A Ghanaian cook believed to be a member of popular event and catering service, Menscook, has proposed to his longtime girlfriend in super grand style on a busy roundabout.

From the looks of it, the proposal was carefully planned and executed to precision on a project that included police personnel, some friends of the to-be-groom and lots of flowers.

Taking into account how the whole proposal unfolded, it could be deciphered that the young man asked the police to stop them at the roundabout where some flowers had been placed to set a romantic mood.

The lady who appeared quite confused over the stop, suddenly switched moods whilst en route to the garden in the roundabout and saw the famous “Will you marry me?” question.

Upon seeing it, her eyes lit up and she hugged her man who officially asked her to marry him amid cheers from other Menscook members who had by now sprung out of their hiding places.

The young lady was so joyous she had challenges standing still as she basked in the special moment and over the thought of finally been taken off the spinsters’ market.