Ghanaian, 38, jailed 40 months in US for online romance fraud scheme 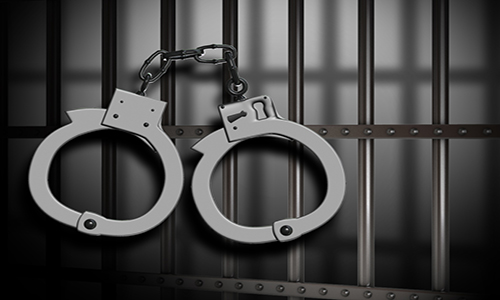 A Ghanaian national was sentenced in the US on Friday to 40 months in prison for wire fraud as part of his scheme to defraud victims on a dating website.

“The defendant repeatedly and shamelessly defrauded a recently widowed victim through a variety of manipulative tactics, leaving her in financial ruins,” said Raj Parekh, Acting U.S. Attorney for the Eastern District of Virginia.

“As this case demonstrates, reporting these scams to law enforcement helps us uncover the fraud schemes and bring scammers, like this defendant, to justice.”

According to court documents, Richard Yaw Dorpe, 38, posed as a single, 57-year-old man from Virginia Beach on “OurTime,” an online dating website for people over 50 years old.

Dorpe purported to be a jeweler who was traveling abroad to buy gold and other jewelry before returning home to Virginia Beach.

Dorpe met victim E.F. who was a 68-year-old recent widow from Chesapeake, on the website and started an online romantic relationship. Between August 2016 and January 2017, through his romantic manipulations, Dorpe convinced E.F. to send clothes, jewelry, a computer, a watch, and over $300,000 to him. Eventually, E.F. realized she was a victim of a scam and was contacted by the FBI.

In January, Ghana approved the United States’ extradition request and the FBI brought Dorpe to the Eastern District of Virginia to face charges. Dorpe pleaded guilty to wire fraud in May.

Raj Parekh, Acting U.S. Attorney for the Eastern District of Virginia, and Brian Dugan, Special Agent in Charge of the FBI’s Norfolk Field Office, made the announcement after sentencing by U.S. District Judge Arenda Wright Allen.

Valuable assistance concerning the extradition of Dorpe from Ghana to the United States was provided by Ghana’s Economic and Organized Crime Office, the Ghana Police Service, the International Criminal Police Organization (INTERPOL), the National Security Agency of Ghana, and the Ministry of Justice and Attorney General’s Office of Ghana. Additional valuable assistance was provided by the FBI Legal Attaché Office, the DEA Country Liaison, the Regional Security Office, and staff at the U.S. Embassy in Accra, Ghana.

Combatting elder abuse and financial fraud targeted at seniors is a key priority of the Department of Justice. Elder abuse is an intentional or negligent act by any person that causes harm or a serious risk of harm to an older adult. It is a term used to describe five subtypes of elder abuse: physical abuse, financial fraud, scams and exploitation, caregiver neglect and abandonment, psychological abuse, and sexual abuse. Elder abuse is a serious crime against some of our nation’s most vulnerable citizens, affecting at least 10 percent of older Americans every year.

Together with our federal, state, local, and tribal partners, the Department of Justice is steadfastly committed to combatting all forms of elder abuse and financial exploitation through enforcement actions, training and resources, research, victim services, and public awareness. This holistic and robust response demonstrates the Department’s unwavering dedication to fighting for justice for older Americans.

It should serve as a warning to others who engage in such acts thinking they are safe and will never be caught.

chairman do yawa. By this time he promise some girl iPhone13 pro

Nobody sent chairman to go and fraud. Now you’ve being caught and whether you promised a girl Iphone 13 or not you’re going to jail. He’s in a hot soup

I tell you . He make shii kraaa. It’s just 5yrs so he will come out now. Am sure if he is back he will learn sense

He’s already regretting his act. What others in this frauding thing should learn from this guy’s case is, no matter where you’re in this world when your cup gets full up, you gonna be court and jailed.

Bro were you there? It’s seems you are attributing the guys arrest to some promises he made to some girls. You erh

I was there ooo, I gave him an advice to quit that job but he never listened

Is frauding even a job? And if you were there and you saw him doing that without reporting him to the police then you need to be arrested too or that one isn’t part😂

With what you’re saying then stealing, prostitution, murdering others etc must be made legal in Ghana since some people engage themselves in that act.

Let them continue surviving from that. When you’re caught you’ll know that the world is big but you’re not getting any space in it

Look at the motivation behind frauding too. You’re taking revenge for the treatment they gave to your forefathers. That person can continue but if he get caught that’s where he will know where power lies

Chairman taught US is like Ghana where you always go Scott free when you scam people or do online fraud. Sia he will come out of prison a changed person

Them ooo I’m not part my Broda​:joy:

He doesn’t know until now. He will enjoy his stay in prison over there and when he comes out he’s gonna preach about it