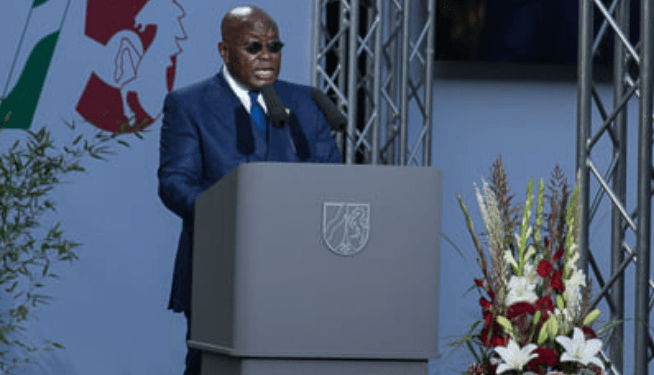 Citing figures to support his claim, the President said Ghana’s average annual GDP growth rate had increased from 3.4 in 2016 to 7 percent between 2017 and 2020.

The President said the resilience of Ghana’s economy is also evident in the positive GDP growth recorded amid the pandemic.

“Government, since 2017 has put in place measures to reduce the cost of doing business, improved the business environment and made the Ghanaian economy not only one of the business-friendly economies in Africa but also one of the fastest-growing economies in the world.”

“Indeed, the economies of many countries around the world were in a recession, having recorded negative growth as a result of the pandemic. Ghana’s economy was one of the very few that still managed to record positive GDP growth,” he said at the Ghana Investment Promotion Centre’s (GIPC) Summit, dubbed ‘Spark up’.

Despite touting Ghana’s economic growth, the President urged Ghanaians to assist in the government’s efforts to build a business-friendly economy.

“This will enable our nation to get to the stage where the exploitation of the opportunities that are available to us will help us build an optimistic, self-confident, self-reliant and prosperous nation. A Ghana Beyond Aid,” the President added.

The summit, which was held both physically and online, was under the theme “Maximising Ghana’s Investment Potential.”

The President was speaking as a special guest of honour.

how do you want it to reflect in our daily lives when they are squandering the money for themselves?

It may be true but
fastest growing != good

Do you guys believe this? We always hear this things but as to whether it’s true or false we can’t tell. Aside that, when the so called economy is growing and yet we the ordinary citizens are not seeing any improvement in our life’s then what’s the importance of the growth in the economy?

He kept saying ‘Ghana beyond aid’ but still runs to the them for loans so he can hire private jets and have a sky bath. At the end of it all, he try to confuse us with all sorts of vocabularies. A classic example of ‘if you can’t convince them, confuse them’. By the way, where is the head of the economic team, Dr. Bawumia? Is he still under the supervision of the senior minister? Ah well.