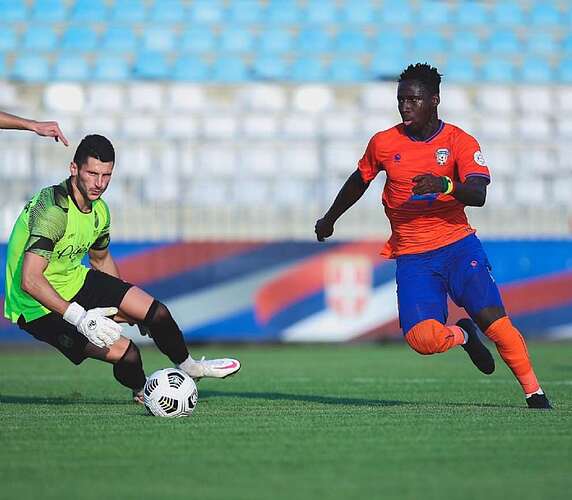 The forward was key for the Saudi club last season especially in the second round when he returned from loan.

In that campaign, the top performances of the Black Stars winger helped Al-Fayha to make a swift return to the Saudi Pro League as they secured promotion from the lower-tier league.

Currently preparing with his teammates in pre-season for the challenge ahead in the 2021/2022 football season, Samuel Owusu today was involved when the side engaged Serbian outfit FK Kolubara in a pre-season game.

On the matchday, the 25-year-old impressed and found the back of the net on two occasions. First, he equalized in the 36th minute to give his team a three-goal lead to take into the break before scoring again 10 minutes after recess.

With Malik Al-Abdul-Moneim, Panagiotis Takhtidis, and Saqr Atif also getting on the scoresheet, the exercise ended very well with Al-Fayha recording a heavy win.

Today’s brace means that Samuel Owusu now has three goals in pre-season. His club will hope he stays fit and sharp when the 2021/2022 Saudi Pro League season finally commences.

Which team too is that . I can’t mention the name. Ghanaian footballers will be playing in countries the can’t mention when asked. So long as the money will come,no yawa