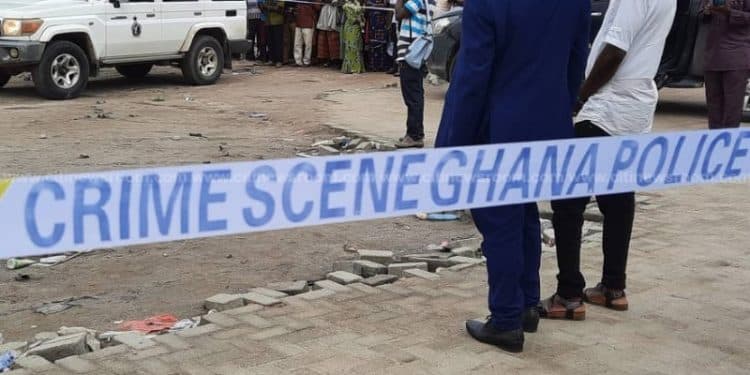 A woman has allegedly been mutilated and hacked to death by her husband at Gbetsile Soldier Line in the Kpone Katamanso Municipality of the Greater Accra Region.

The husband, Thomas Kontoh, a man believed to be in his mid-50s, allegedly hanged himself after the incident early on Tuesday, August 31, 2021.

The woman in her 40s, identified as Lydia Amponsah, had her ears cut off and suffered multiple cutlass wounds.

Speaking to Citi News, the traumatised niece of the deceased, Michaela Okata, who witnessed the incident, narrated that at around 1:30 am Tuesday dawn, Thomas Kontoh allegedly broke into their room with a cutlass and butchered Lydia Amponsah.

“I heard someone knock on our door at dawn. It was my uncle who was calling out my auntie. He forced his way into the room. He had a cutlass in his hand. After a little disagreement, he slashed her with the cutlass.”

“My auntie asked me to call for help, so I took to my heels, although I didn’t want to go. I wanted to stay behind and save her. I returned to meet my auntie dead,” she recounted.

She also said Thomas Kontoh subsequently chased her in an attempt to also kill her, but she managed to escape into a neighbour’s house.

She said she returned later to find out that the Uncle has also committed suicide by hanging.

Officers from the Atadeka Zenu police were deployed to the scene to convey the bodies.

According to neighbours, the couple had had marital issues in the past, but it is not clear what triggered the brutal assault.