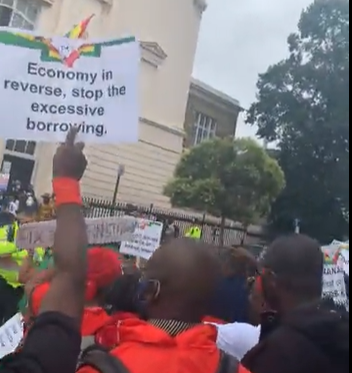 Ghanaians living in London have amassed outside the Ghana High Commission in London to protest economic hardships in their home country, Ghana.

The video streaming live on social media shows a group of protesters holding placards, banners and paraphernalia shouting, “What do we want? fix it! When do we want it? Now!” Shame! Shame! Shame on you, Akufo-Addo!”

They are demanding that the elected government fix the economy and lessen hardships in the country. According to the protestors, the incumbent government promised better governance and workable solutions to alleviate the plights of Ghanaians, but that was not so. They are charging the president to keep his word to the good people of Ghana.

FixTheCountry started as a social movement on Twitter has now become the forefront of activism for patriotic citizens.

Why are Uk residents protesting for us in the country. I believe they feel the pressure too , but why are they trying to sell us in abroad like that, I’m not in support of this kraa

That is the way to go people. Hit them hard from all angles until they have no where else to go. From UK, wherever the presidents will go should do the same. Play time is over.