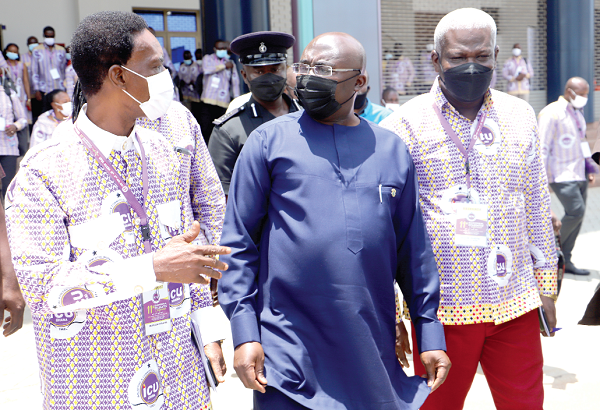 The Vice-President, Dr. Mahamudu Bawumia, has described as scary the state of the banking system in the country prior to the financial sector clean up by the government.

He said the sector was days away from collapse, hence the bold and timely intervention by the government to clean up the sector to safeguard the hard-earned lifetime investment of some 4.6 million depositors.

Dr. Bawumia, who was addressing members of the Industrial and Commercial Workers Union (ICU) at the 11th quadrennial conference of the union in Accra yesterday, said much as the decision to clean up the sector was painful, it had to be undertaken.

“We would have had a collapsed banking sector and this economy would not have recovered that easily if depositors had lost their savings with the banks. We had to expend GH¢21 billion to save depositors’ money at the banks, savings and loans, and microfinance companies to restore confidence in our banking system. Without that rescue package, we would have been in a different situation,” he added.

The Vice-President further said although the previous government had recognized the problem, it took the courage of President Nana Addo Dankwa Akufo-Addo’s government to fix it.

“The questions that arise are: Was it too bitter a pill to swallow? Did the Bank of Ghana go overboard? The situation could be likened to having cancer on your toe and realizing that if you do not cut the toe-off, it will spread. So we had to cut it off to save the banking system,” he said.

The three-day conference is on the theme: “The impact of the COVID-19 pandemic on business and labor: The role of social partners”.

The conference, which is held every four years, will witness the election of new officers to steer the affairs of the union for the next four years.

About 410 participants, including 307 delegates and 88 observers from 11 administrative regions in the country, are attending the conference at the auditorium of the University of Professional Studies, Accra (UPSA).

On the depreciation of the cedi, Dr. Bawumia said “we are a very high import-dependent economy and when the cedi depreciates at appreciable levels, we feel it in the prices of goods and services, such as electricity and petroleum”.

He expressed the government’s resolve to stabilize the cedi, saying the value and the stability of the cedi were important keys to economic development.

He also called for strong tripartite collaboration among the government, industry, and labor for a harmonious business environment to attract investors to help grow the economy.

He added that as the government strengthened the regulatory framework across different sectors of the economy, the ICU must also build a viable corporate governance culture across the institutions it represented.

The Vice-President also said the debilitating effect of the COVID-19 pandemic disrupted the global supply chain, and that it was to alleviate the hardship brought about by the pandemic that the government introduced some interventions, such as subsidizing electricity for 4.7 million customers between April 2020 and March 2021 and the disbursement of GH¢412 million to businesses.

He said although the pandemic had had a toll on the economy, data from the Ghana Statistical Service (GSS) indicated that the economy was gradually rebounding.

The General Secretary of the ICU, Rev. Solomon Kotei, entreated the government to scrap overtime tax, which he said was a disincentive.

According to him, the financial sector clean-up exercise was rather too harsh, and that the closure of borders also brought untold difficulties to the people.

The Vice-Chancellor of the UPSA, Prof. Abednego Feehi Okoe Amartey, commended the ICU for the conference and also for ensuring relative industrial peace in the country.

He called on institutions of higher learning to step up their contribution to national development.