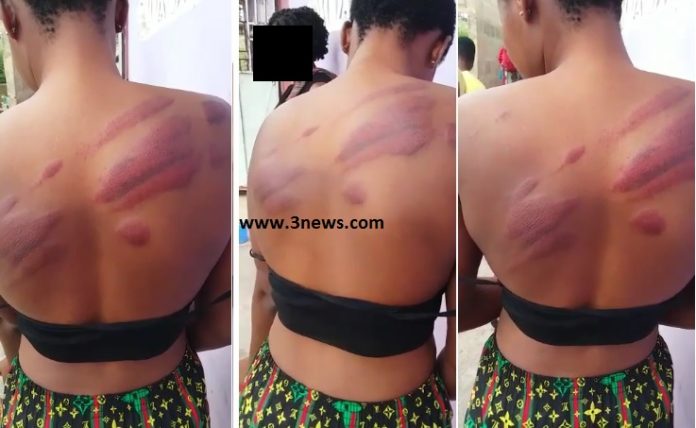 The Jachie Pramso SHS (JAPASS) student, who was allegedly assaulted by the school’s headmaster, is traumatized as she fears the situation may affect her output in the ongoing West Africa Senior School Certificate Examination (WASSCE).

Identified as Mary, the 19-year-old final year student while speaking on Akoma FM‘s current affairs and political show GhanAkoma Tuesday, September 7 laments she was whipped with cane by her headmaster without any justification.

Mary told host of the show Aduanaba Kofi Asante Ennin that “last week Thursday, we were in class and our headmaster was about to punish my colleague for dressing inappropriately so I gave him my jacket to cover up his indecent dressing then the headmaster asked me to go to his office and wait for him”.

“He later came to the office and beat me mercilessly,” she narrated.

Glaring video of cane marks at the back of Mary showing how she was subjected to assault has been trending on social media, a situation a section of Ghanaians has described as unfortunate.

The final year student, a victim of corporal punishment, explained she feels sharp pains in her spine which makes sitting almost impossible.

This means it will be difficult for her to sit for the subsequent papers of the WASSCE.

“Now I can’t even concentrate and learn because I’ve been traumatized I have not been able to go to campus since the incident happened and I’m scared it might affect me.”

Meanwhile, Ashanti Regional Coordinator for Girl Child Education of the Ghana Education Service (GES) Hannah Amponsah, wading into the conversation, described the incident as unprofessional and urged the victim to report it at the district education office for it to be reported at the regional level for appropriate measures to be taken.

The JAPASS Headmaster, identified as Mr Donkor, who has been accused of assaulting the student, is yet to give his version of the story at the time this report was filed.

His phones have been off.
3news.com|Ghana**

I’m sure she has some personal issues with the headmaster. You can see passion was included in this situation

It is illegal. But this is Ghana

This is so bad . The headmaster must face the law for causing physical harm to the student. I think he’s venting an anger he has from his wife on the girl cos this pictures are disturbing to watch.