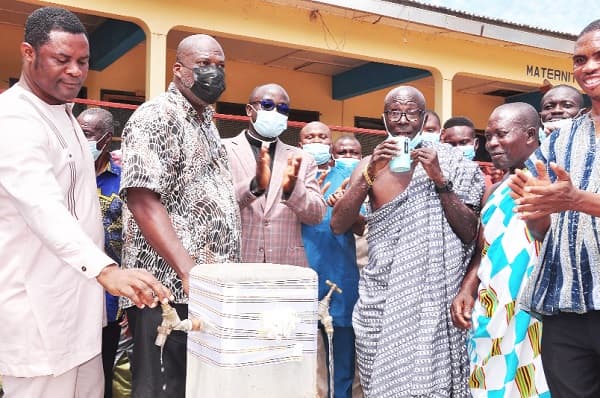 Mr. Francis Poku (2nd left), CEO of Afriwave Telecom, and some elders of the community look on as Nana Osei Yaw, chief of Ekye-Amanfrom, takes a sip of the water after the facility was commissioned

Afriwave Telecom has rehabilitated an abandoned water facility to serve the over 7,000 residents of the Ekye-Amanfrom community in the Kwahu Afram Plains South District of the Eastern Region with potable water.

The facility was constructed by the Millennium Development Authority (MiDA) but was abandoned by the community for a decade due to the salty taste of the water from the borehole.

Afriwave is a Ghanaian company that provides telecommunications solutions and is the first interconnect clearinghouse service in Ghana.

The rehabilitation works, undertaken upon an appeal by the community, included the tapping of the raw water from the Afram River through submersible pumps and pipes, which had been extended 750 meters into the river from the shore.

With the extended pipes, raw water can now be effectively and efficiently channeled through treatment plants before it is pumped into storage tanks for accessibility by the people.

The treatment plant has also been improved to deal with the salty taste of the water.

At the inauguration ceremony, the Chief Executive Officer (CEO) of Afriwave Telecom, Mr. Francis Poku, said access to safe drinking water was a fundamental right of every citizen and not a luxury or a privilege.

“The revamped water facility means the community will have access to clean drinking water which will, in turn, impact the health and sanitation of the thousands who desperately need it,” he said.

He further noted that Afriwave, as part of its corporate social responsibility activities, had also supported the education of the youth in ICT by giving opportunities to students from public and private universities to learn on the job as interns and national service persons.

The Commercial Director of Afriwave Telecom, Mr. Henry Searyoh, said the rehabilitation of the water facility was further proof of how the company had elevated the needs of the people as a priority.

He said the gesture was also to support the community in the fight against COVID-19 given that clean water was key to efforts to stop the spread of the virus.

“Afriwave is a people-centered brand and we are happy to touch lives by saving the residents of Ekye Amanfrom from drinking unsafe water,” he stated.

The Secretary to the Unit Committee of Ekye-Amanfrom, Mr. Charles Sebi, who led the campaign to solicit support for the repair works, expressed appreciation to Afriwave for coming to their aid.

“We are grateful that our cry for help caught your attention,” he said.

bilitated an abandoned water facility to serve the over 7,000 residents of the Ekye-Amanfrom community in the Kwahu Afram Plains South District of the Eastern R

This is very good. Other private institutions should learn from this and also take the initiative when it is important to do so