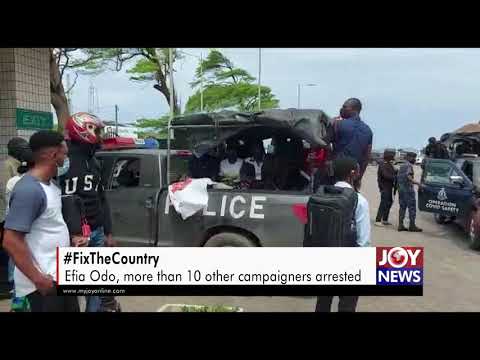 Actress Efia Odo has been arrested alongside 14 other FixTheCountry campaigners by the Police today.

Campaigners of the FixTheCountry protest in the last few weeks have been in Court to overturn an injunction secured by the Ghana Police Service.

Today, lawyers of the FixTheCountry conveners were in Court as well as representatives of the Ghana Police Service.

According to information gathered, Efia Odo and several advocates of the campaign who trooped to the entrance of the Law Court Complex premises of the Accra High Court were picked up by the Police.

While it is unclear why they were arrested, pictures taken have revealed that some of them were wielding placards.

Information picked up indicates that the Director of Operations at the Accra Regional Police Command led a team of officers to initiate the arrest.

Meanwhile, the Court has ruled that Attorney General Godfred Dame can represent the Ghana Police Service in the case against the FixTheCountry conveners.

Ndc had a successful demonstration but no one was arrested before; during and after the demonstration. I don’t know why the police is harassing and intimidating these young people

Afia has suffered in the hands of Ghanaians oo. Common demonstration that is her constitutional right, police want to take it away from her. Anyway, she’s a strong lady and I know she wil bounce back strong. Still fix the country ooo tom