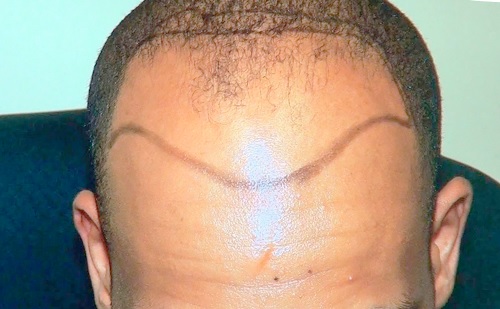 Most men attribute their receding hairline to genetics

Receding hairline or crown thinning is common in men, especially after the mid-30s.

Some men start seeing signs of baldness even in their early 20s and in most of these cases, the cause of baldness is attributed to a hereditary condition — their fathers, grandfathers and other male relatives experienced baldness at a point.

However, according to a certified trichologist (a specialist in hair and scalp care and treatment of associated conditions), Ms Nekuh Mensimah, eating unbalanced diets is a major cause of baldness.

She said the hair and scalp were the final parts of the body to absorb nutrients from food and so if the food did not contain enough nutrients, they (hair and scalp) suffered.

Ms Mensimah explained that while most of our meals were high in carbohydrates, the vegetables were also overcooked, leaving them with little or no nutrients.

The little nutrients in the meals are thus absorbed by the other organs in the body, leaving the hair and scalp with none.

She said it was true that baldness could be as a result of a hereditary condition known as androgenetic alopecia, commonly known as male pattern baldness, however, that condition could be reversed.

“A lot of men simply decide to ignore signs of baldness because they have seen similar signs in their male relatives. Having that gene does not automatically mean you must also go bald. You can have the gene but usually, there is something that triggers the gene to be active. If you ignore the signs, it will just progress and you will get bald but you can make a decision to treat the hair and the earlier you start treatment the better results you are likely to get,” she said.

She added that some hair loss conditions were also side effects from certain medications, stress or an indication of a more severe condition.

Men concerned about baldness
Ms Mensimah runs Hair 4 TWO, a hair and scalp treatment centre at Tse Addo in Accra, and she stated that most of her clients were men who reported with different forms of baldness.

They also attend to men who want to grow their beards or had inflammations and infections in their beard.

She said the youngest they had seen was a 23-year-old man, with the highest number of clients between 32 and 52 years.

Once they reported to the facility, their hair was physically assessed and followed by a microscopic assessment, which she explained was the most accurate way to determine what was happening to the hair.

Tricology is the study of hair and scalp care treatment, wow I just learnt something new today. So not eating balanced diet could cause receding hairline or hair loss. The men, please take this seriously if you don’t want to be bald. I also think it’s hereditary and old age that causes bald hair though

Any young guy with a ‘sakora’ is not his style of hair but he his head is bald. Whether it is attractive or not, the ladies will decide.

As for me, I will do my best to balance my diets so I don’t ever have to experience this. Thanks for sharing.