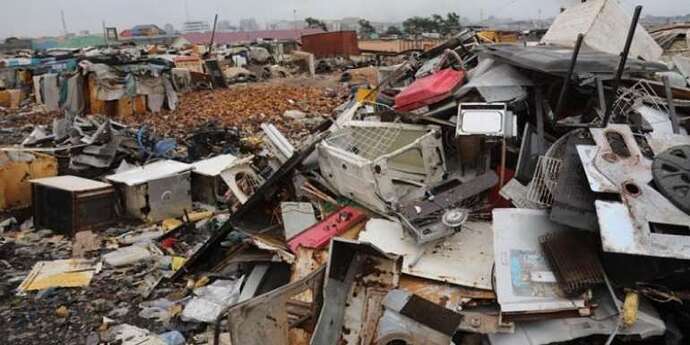 The Environmental Protection Agency (EPA) has said it will collaborate with stakeholders to ensure the new site designated for the Greater Accra Scrap Dealers Association is not polluted by electronic waste.

In an interview with Citi News, the Executive Director of the EPA, Henry Kokofu, outlined plans to address this kind of pollution at their new place.

About 4,000 scrap dealers were affected by the demolition of the Agbogbloshie onion market and later secured for themselves a 50-acre land at Teacher Mante in the Eastern Region at a cost of GHS 1 million to conduct their business activities.

“They are going to be directed to existing facilities that we have licensed, and we know that they are working within the confines of the law, and we can properly regulate them.”

“We will be able to also gather them as small scale groups wanting to work in these areas and get them more refined operational activities,” Mr. Kokofu said.

The scrap dealers at the Agbogbloshie market were evicted earlier this month and their properties were demolished after failing to abide by a July 1 deadline for them to relocate to Adjen Kotoko in the Ga West Municipality.

Agbogbloshie was considered by some to be the world’s largest e-waste dump and one of the most toxic places on earth because of the chemicals emitted from the burning of e-waste.

The EPA has also stressed the importance of the quick development of the cleared site at Agbogbloshie to prevent encroachment.

“The entire area belongs to the National Sports Authority. The EPA has asked them to come out clearly with plans to develop the area or whatever needs to be done. Otherwise, if you leave it bare, by the time you realise, people will encumber it again.”

Good move by the EPA, one of my greatest fear is dying young as a result of air pollution. Last week , Ghana Health Service made a shocking revelation on the deaths recorded every from air pollution. About 3,239 people die annually from such pollution.

The scrap dealers must not be allowed to engage in this practice anymore.

It’s should be just warnings and talks because as Ghanaians we believe in actions measure should be put in place before it gets bad. It’s good EPA are taking this serious but it shouldn’t just end here