Driver distraught as car burns to ashes on Legon road 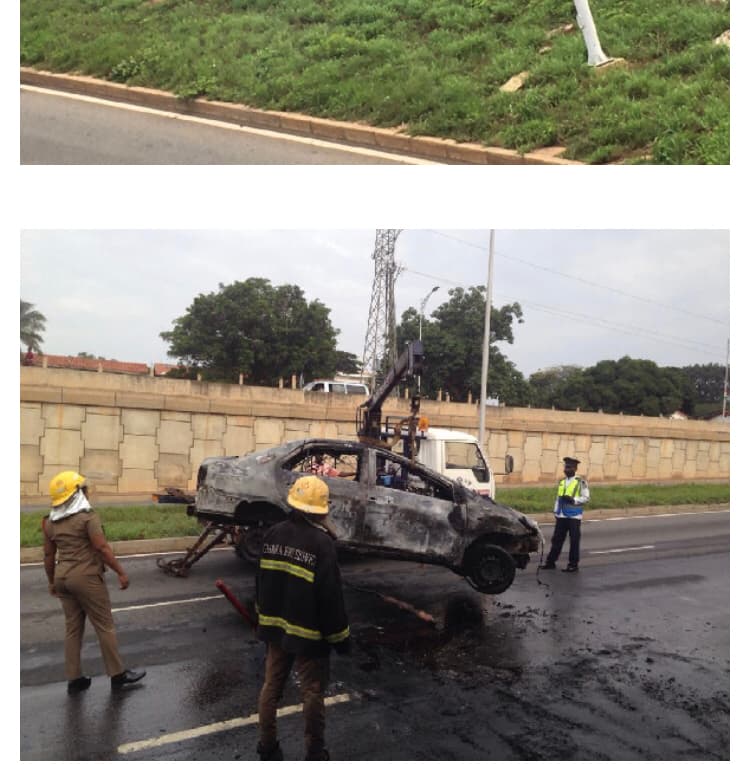 A saloon car caught fire on the Legon bypass on Thursday, August 19, 2021.

The driver of the Toyota Yaris with the registration number GX 2031-21, could not hold back his tears due to the intensity of the damage. He has also denied overspeeding as earlier speculated by one of the firefighters.

“You can clearly see that my car is gone, instead of you asking me what exactly happened, you are here telling me that I was overspeeding. Do you know what caused the accident? You don’t have any idea but you rather stand here and tell me that it’s overspeeding. You are not in my shoes so you rather have to ask me what’s going on,” said the driver.

An eyewitnesses said the driver was overspeeding and veered off to hit the side of the overpass after another car hit the backside of his, causing it to catch fire.

It took the efforts of the Ghana National Fire Service to quench the fire, however, the car has been burnt beyond repair.

An eye witness told the media

“I was going to work this morning when I saw the car burning, there were a lot of people around here watching. I tried calling the emergency lines but they were not going so I had to turn with my bike to the other side and go to the Fire Station to make a report and come with them to help them fight the fire… As soon as I got there, in less than a minute they dispatched to the scene.”

Narrating the incident to the police, the affected driver who isn’t the owner of the burnt Toyota Yaris said he was running an errand this morning when the unfortunate incident happened.

"I was returning after delivering something. All I could see was that a big truck hit me from behind. I lost control and hit the side of the road. All attempts to reach the Fire Service and Police were unsuccessful. We managed to fight the situation with a fire extinguisher, but just when we thought the fire had died off, we saw fire coming from the bottom of the car, then it exploded.

“I don’t know if the Police officers we contacted earlier were able to arrest the driver who caused the accident. The car doesn’t belong to me but the owner is also here at the scene,” he told the police.