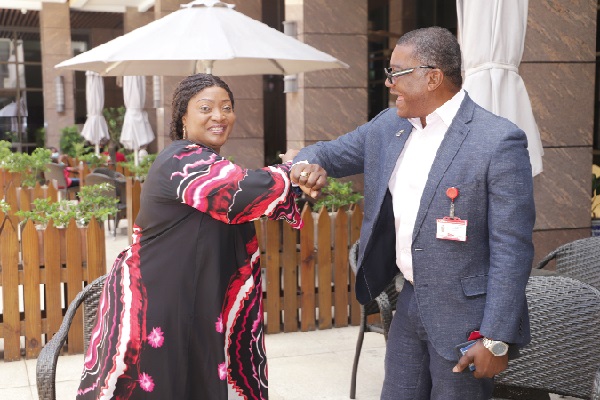 The Vice-President of Liberia, Mrs Jewel Howard Taylor, has cautioned Ghanaians not to beat the war drums anytime they are confronted with challenges as it is not the right way of resolving problems.

She said whatever issues emerged, whether good, bad or ugly, it was important for people to discuss those issues and the right solutions found to them, rather than beating the war drums that would derail the enviable peace of the country.

“Coming from Liberia, a war-torn country still struggling to find its feet, I know what it means to have peace and security as well as what war can do,” she said.

In an interaction with the Editor of the Daily Graphic, Mr Kobby Asmah, in Accra over the weekend, Mrs Taylor, who is also the wife of former Liberian President, Charles Taylor, said Ghana was an example of a true democracy which Africa was proud of and, therefore, urged that all hands must be on deck to guard the valuable asset the country had.

She stressed the need for Africa to acknowledge that power could not be taken by force as the genesis of all conflicts was always about the struggle for power which should be done through the ballot box.

“And proudly, Ghana has shown the way in that aspect by successfully and peacefully changing power through the ballot box, a situation which has made the country a source of pride in Africa,” she emphasised.

The Liberian Vice-President was in Ghana to pay her last respects to Lieutenant General Joshua Hamidu, former Chief of Defence Staff, who was laid to rest last Friday.

She described the late Lt. General as a family friend who was very close to her former husband, Charles Taylor, and was very instrumental in bringing peace to Liberia during those turbulent years.

“I will use this opportunity to express my appreciation to the government and people of Ghana, as well as other regional leaders who intervened in Liberia during the crisis to bring the needed peace and stability to Liberia,” she said.

Mrs Taylor said Africa should learn that power could not be taken by force as the genesis of these problems was always about the struggle for power, which should be done through the ballot box.

She reiterated that peace was very crucial in the socio-economic development of a country, stressing that once there was peace, all other things were possible.

On how Liberia is sustaining the peace, Mrs Taylor said peace was a sine qua non for everything and once they had the peace which was cemented by the election of Mrs Ellen Johnson Sirleaf in 2006 and during her two terms which ended in 2018, they put in place laws which had helped to sustaining the peace in the country.

Liberia’s Vice-President intimated that her country had a young population, with 60 per cent of the youth being war babies who did not witness the atrocities of the war and “we pray that what happened then never happens again.

“Sixty per cent of our young population is growing faster compared to us, they do things the digital way as they live in the digital world.

“The big question is how are we going to ensure that they are fully engaged and involved in whatever we do to develop the country,” she said.

Mrs Jewel Taylor was concerned about the number of African youth who travel on a daily basis through the desert and on the seas to seek greener pastures and die in the process and opined that the time had come for Africa to create its own centres of excellence so that the children, the continent’s next generation, will develop it to another level.

She said there was the need for all leaders of Africa to internalise all the resources within the continent in order to develop “as whatever we require is right here in Africa, and there are so many opportunities here.

“As the western world has formed their blocs in order to consolidate their gains, Africa needs to do same,” she stressed.

According to Mrs Taylor, transitioning from being a former First Lady to being the Vice-President of a post-conflict nation has been very challenging, but being an activist of gender equality had propelled her to forge ahead.

To her, it was important for competent women to play roles in all aspects of a nation’s development, be it in the executive, judiciary, academia, security services, politics and the socio-economic activities, to help in the accelerated development of their countries.

The Liberian Vice-President further said in the past, women trained to take up roles as secretaries, nurses and teachers among others, but that had changed now and in order to climb the societal ladder, women first needed to know what they were cut out for.

She said it was encouraging to see more women take up roles up the ladder becoming whatever they wanted now, but the pace was still slow, advocating a change going forward, given their key role in development.

”When I was enrolled at the university aged 17, I had no idea what subject I wanted to read and to top it up, my father warned me not to do political science because politics was not for women so I had to settle on banking.

“But here I am today fully in politics and I have learnt that as a woman, you have to find a way to make your voice count and be heard, you have to find your passion and be prepared for the challenges ahead, as the higher you climb, the bigger the problems,” she advised.

She further encouraged all women not to relent in their dreams and that “once you step up on the stage, you cannot fail as so many eyes are on you with great expectations”.

Mrs. Taylor has seen the devastating effects of war in Liberia. She has experienced and seen it all so her advice is as important as a wise counsel. Ghanaians must learn to be tolerant and stay far from war drums. The media, youth and women and leaders of Ghana should take this because it is the best advice anyone can give us

She has said it all. Dialogues, discussion, peaceful demonstrations, are the Best options to resolve eating situations. Having experience war and it side effects on a country, she has made solid points for consideration.
Coming to the issues of youth empowerment, Africa

as a continent, is old enough to create enough jobs for Africans to live and work in Africa.
When this happens, they will stop criss-crossing the length and breath of other continents looking for greener pastures.
The women is soaked with wisdom and rational thinking