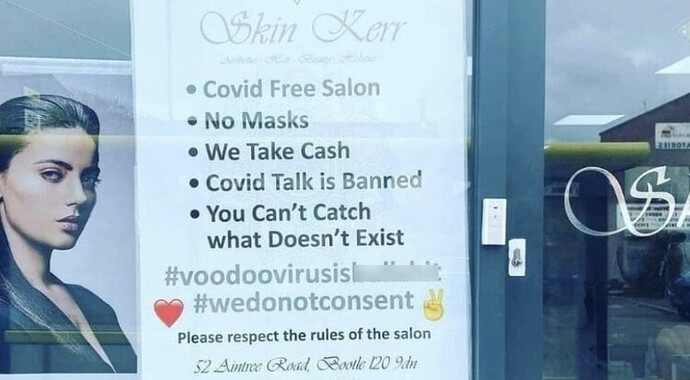 A beauty salon owner has been fined £12,000 for breaching Covid regulations by aiding a protest during lockdown.

Julie Saunderson, 43, who owns Skin Kerr in Bootle, Merseyside encouraged a crowd of about 300 people in Liverpool to protest against restrictions, the Crown Prosecution Service (CPS) said.

Previously her salon was ordered to close for inadequate Covid precautions. She failed to turn up to court and was found guilty of three counts of breaking Covid rules in her absence.

Due to the rising number of cases in England, a nationwide lockdown was imposed from 5 November for four weeks.
It prompted protests in Merseyside on November 7, 8 and 21.

The CPS said Saunderson, of Callan Crescent, had already come to the attention of the authorities earlier in the pandemic as her salon put up posters claiming coronavirus was a hoax and had been ordered to close for operating with inadequate Covid measures.

The salon had been allowed to reopen before the November lockdown.
Saunderson was spotted by police officers monitoring a protest on 21 November and “encouraging” the crowd by shouting “this way” and gesticulating for them to follow her which was captured on police body-worn cameras, the CPS said.

She was fined £10,000 at Liverpool Magistrates’ Court for her role in the protest and a further £2,000 for two other breaches and ordered to pay £620 in costs and a £190 victim surcharge.

“Julie Saunderson clearly did not think legislation brought in by the government to control a pandemic applied to her,” Lydia Durkin from the CPS said.

"A national lockdown was in place on 21 November and people were required to stay at home… and certainly not to gather in any numbers outside of the home.

“Ms Saunderson ignored this, as she had earlier ignored calls to close her beauty salon.”