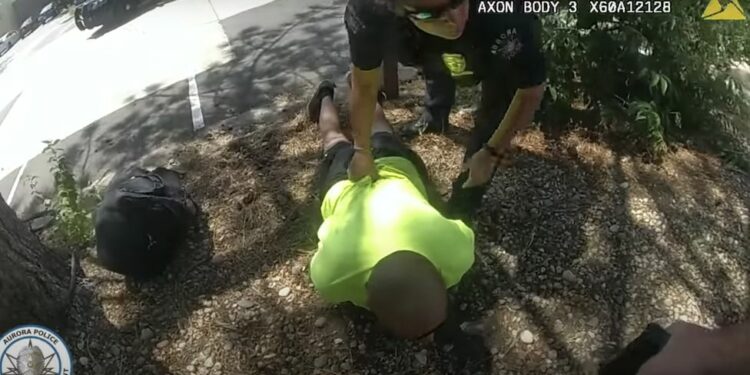 A Colorado police officer has been arrested after being filmed threatening to kill a man during an arrest.

Body camera footage shows Aurora policeman John Haubert using a pistol to strike the man, saying “if you move, I will shoot you”.

The arrest comes amid intense scrutiny of police misconduct in the US following the 2020 death of George Floyd, which sparked national protests.

A second officer has also been arrested for failing to stop Mr Haubert.

Footage played for the press on Tuesday shows Mr Haubert repeatedly saying “stop fighting” as the man tells him “I can’t even breathe” and “you’re killing me”.

The man – who was being arrested on suspicion of trespassing – was admitted to hospital following the incident.

According to an arrest warrant, Mr Haubert is now being investigated on various possible charges, including assault and threatening with a deadly weapon.

The second officer, Francine Martinez, faces charges for not trying to stop Mr Haubert’s use of force. Both officers have reportedly turned themselves in.

For years, Aurora’s police department has faced allegations of misconduct, including the death of a man during an arrest in 2019.

As part of a new accountability law, Colorado police officers are required to step in when they witness incidents of misconduct or excessive use of force.

At a conference on Tuesday, Aurora police chief Vanessa Wilson said the arrest was a “very despicable act.”

“It is very disturbing,” Ms Wilson said. “We’re disgusted. We’re angry. This is not police work. We don’t train this.”

A bill passed by Colorado’s legislature last year bars police from using deadly force against suspects unless they are facing imminent danger from a weapon.

Additionally, the law bans chokeholds and removes the qualified immunity legal protection for officers, potentially exposing them to lawsuits. By 2023, all police officers in the state are required to wear body cameras.

On-duty police officers in the US kill civilians at a rate of 33.5 people per 10 million each year, according to advocacy group Prison Policy – a higher rate than most wealthy nations.

Why do I have a feeling that because of what happened to Floyd, the blacks might take advantage of the situation to misbehave? You know, our people can be rowdy and annoying sometimes. Regardless, what the police did was terrible and he must face the music. BLACK LIVES MATTER.

The introduction of the body cam on the police uniform has helped a lot, it has made it easier for retribution toward police in the US. How can a police man tell a civilian if you move I will shoot you with the gun pointed at him.

In some countries, police can arrest another officer for attempting to shoot and but our country is not like that. The Ejura killing should have not happened if there were sensible officers among them