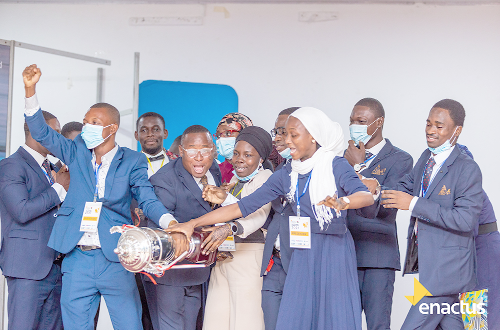 The 2021 Enactus National Champions with the trophy

The 2021 edition of the Enactus Ghana National Competition lived up to the expectation of the organisers and sponsors when the curtain was brought down on the competition, with CK Tedam University of Technology and Applied Science (CKT-UTAS) emerging national champions.

The national champions competed with Central University, University of Energy and Natural Resources (UENR) and University College of Management Studies, Accra (UCOMS) in the grand finale.

The competition, which came off in Accra on July 22, brought together over 200 participants, including academic leaders, business executive and students across the various tertiary institutions in Ghana.

In a showcase of entrepreneurial ideas and shared innovation that sought to transform lives and create better communities, the participants were challenged to exhibit ideas geared towards the transformation of the country.

More than 10 Enactus teams from universities across the country participated in the national event.

When the representatives of each of the competing universities were called on stage the atmosphere was charged, with some students and members of faculties of the schools cheering the contestants on.

The teams from the UCOMS, Central University and UENR placed second, third and fourth respectively.

Meanwhile, the national champions, Enactus CKT-UTAS, will advance to the 2021 Enactus World Cup event to be held virtually from October 14 to 21, this year.

The Programmes Manager of Enactus Ghana, Mr Evans Hokey, stated that Enactus International was a global non-profit organisation (NGO) which empowered university students to use their entrepreneurial skills to come up with innovative projects to solve challenges in their communities.

“And so, today is the Enactus national exposition and it is to engage the next generation of entrepreneurial leaders to use innovation and business principles to improve the world.

“The competition, therefore, will bring positive energy and impact for people, planet and prosperity to life,” he said.

He said those students were guided by educators and supported by business leaders, teams of students to conduct need assessments in their community, identify potential solutions to complex issues and implement community impact projects.

The Programmes Manager observed that Enactus had since 2000 been implemented in Ghana with several projects impacting the lives of people in communities in the country.

“Recently we undertook a project known as ‘Ready to Grow’ which trained 800 young women on how to produce reusable sanitary towels in their communities.

“This results in communities benefiting from collaboration and fresh innovation, plus students gain valuable experience to advance their personal and professional lives," he said.

The Team Leader of the CKT-UTAS, Mr Awanah Atamakira, said his team presented an innovative project called Waste-Tek to emerge as the ultimate winners of the national competition.

He said the project sought to creatively and innovatively convert spoilt refrigerators into the production of poultry incubators, storage pressers and containers as well as sitting stools.

Mr Atamakira added that his team, Waste-Tek, was well positioned to win the ultimate prize for Ghana at the Enactus World Cup 2021.