Burgeoning Ghanaian dancehall singer, Choqolate GH, has dazzled her many social media fans and followers with her latest photo which is causing massive traffic online.

The singer who shares a striking resemblance to late singer Ebony Reigns, has released a new photo of herself without make-up.

Unlike her other photos that see her posing without make-up, Choqolate GH, this time around decided to flaunt her all-glammed face.

In the photo, Choqolate GH was seen wearing an orange sleeveless dress as she graced a wedding she was invited to.

After posting the photos, Choqolate GH captioned it: “am a Queen and I don’t fight with Peasants!!! wedding guest”

Many fans and followers who saw the photo took to the comment section to share their views over the singer’s beauty. 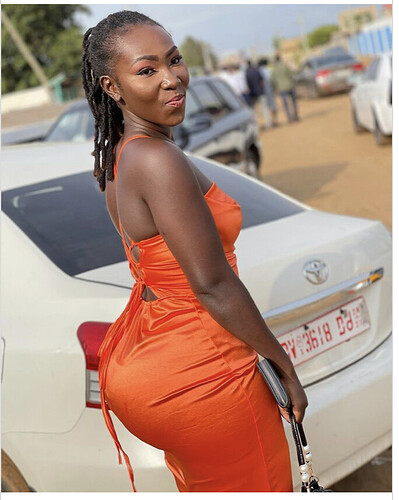 Ooh her name choqolate. I love eating choqolates cos they are made of cocoa and healthy for the body. Since she’s also my type of chocolate, any contact for me to initiate a chocolate business Idea? Please link her up cos I’m ready for serious business only. Tenkew