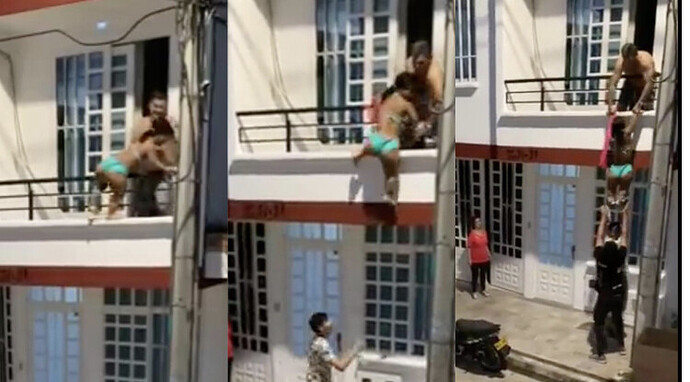 A cheating husband was left with no route of escape than to help his sidechic jump down from the stprey building they were having a supposed affair on when his wife came knocking.

Apparently, his wife suspected that her husband was in there with a woman cosidering the fact that she had to banged the door severally before it opened.

Sensing potential chaos, the man quickly came out to the corridor to watch his wife downstairs banging the door to be opened. He quickly went inside and helped this diminutive side chic jumped down from the storey.

Onlookers helped her to get down safely after the wife had forcefully opened the door and gone inside to assess the situation. The diminutive side chic quickly hid herself under a cardboard in order to hide from the angry woman.

. This game is a dangerous one mhen. It’s for hard and smart people like this man and his sidechick. The brevity to jump that height alone is enough to qualify the lady to come a military woman. Cheating no good herh

Onlookers helped her to get down safely after the wife had forcefully opened the door and gone inside to assess the situation. The diminutive side chic quickly hid herself under a cardboard in order to hide from the angry woman.

I wish I was there to witness this dramatic experience

Like I will shout and call the wife to come see and armed robber escaping from her house.

The way the woman was running kraaa made me laugh

So when the woman came out she saw the carton moving

Ooh but it doesn’t matter. Men are always men.
they will have the most beautiful lady as wife but still chase groupie and “sub standard women” . See the shortingo he’s cheating with but it’s normal.
@KhodedBoss2

. I would have done the same thing too. Imagine if it had happened in Accra here the way people would have helped the wife to chase the side chick

Men are mostly polygamous. Society has forced monogamy on us. Just look at all the male mammals.

Buh it’s too much . We have to control our machines a bit

True my boss @kod , if men were allowed to marry like the Islamic law suggests , some of these incidents of sidechics being beaten and disgraced would have reduced. Polygamy is not a sin but society makes look it’s something bad.

I won’t marry a polygamous man if he can’t allow me to marry another man too. Any man who suscribes to polygamy should be also agree that it works with both genders, not only men . We all have right and freedom under the same religious laws @Kusie_Maame_Twe and @kod

this matter errhh . It this modern ladies that makes it look like a man should solely be theirs

I won’t marry a polygamous man if he can’t allow me to marry another man too.

Of course. It works both ways. But trust me. If you found a guy you were really into, naturally you’d just want to focus on him. It’ll be harder for you to go for multiple partners if you found the “one”. But that “one” will happily jump ship instinctively.

I completely agree with you sis. If a man can take as many women as he wants that same man shouldn’t a problem any problem with his woman double crossing or having multiple partners

. Buh that one it’s your matters erhh

Ladies of today ,you know rights more than anything eeii. There was no where in the history of the Bible where a woman married more than one husband. Even in this human race, it rarely happens so I think we should accept and normalize men marrying more than one or two women cos the way womens’ population is shooting high, will mean 70% of them won’t get husbands i their life time oo.

Oh the thing is, a locker which can be opened with any key will be replaced but when a single key can open so many lockers, it’s called a Master Key

Bro you see that thing?