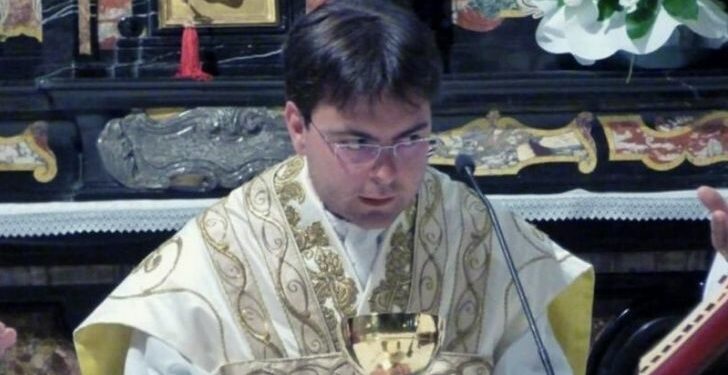 Gabriele Martinelli is likely to face a six-year sentence for abusing a fellow boarder at the seminary for altar boys before becoming a priest.

Prosecution lawyer Roberto Zannotti revealed to the court in his closing argument that Gabriele Martinelli, in his youth, repeatedly abused another young boy during their 5-year stay in the seminary. Both Gabriele and L.G. (the plaintiff ) were boarders at the seminary for young boys who are altar servers in St. Peter’s Basilica.

According to L.G., he was 13-years-old when his mate, Father Martinelli, seven months older than him, started the səxual harassment.

As reported by the NewYorkTimes, “Defense lawyers insist that the abuse never occurred, though they complained about the initial narrative that emerged in Italian media, which cast the case as an example of paedophilia occurring within the Vatican’s walls.”

But the prosecution argued that Gabriele Martinelli was able to force L.G. into the abominable act through his position at the seminary. He cited favours such as serving mass with the pope as one of the many incentives in exchange for səxual favours.

Mr Zannotti described what transpired as “acts of violence” that were allowed to continue because Father Radice, then the seminary’s rector, covered for the accused abuser.”
“The rector’s “behaviour is even more serious because of his role and his obstinacy in covering up facts that were evident to all, “Mr Zannotti continued.

The alleged abuse, which is said to have taken place between 2007 and 2012, drew international headlines. In part because the institution — St. Pius X youth seminary — is a stone’s throw from Casa Santa Marta, the residence of Pope Francis.

Father Martinelli, ordained as a priest in 2017, now lives at a residence for senior priests in northern Italy.
A verdict in the case of səxual abuse inside the walls of Vatican City is expected in October.

People who claim to be doing the work of God are now doing this.
When the fresh leaves are burning, what will the dry ones do?

Hehehe. To make matters worse, he did that to another male. The priest is a homosexual.

I wonder what at all is in that shit hole for this brats. Like a ladys’ own sef make sense small erhhhh…or u say watin?

This trumu trumu Catholic priests will come and say they are Holy. Holy fo r the where? See his face like a suicide bomber. In fact one of the Christian religious sect that must overhaul their practices and doctrines is the Roman Catholic Church. Sodomy and peadophilia has taken the center stage amongst the ‘fathers’.

Marry too aaa , you say no, your doctrines don’t say so.