# Can Cristiano Ronaldo and Bruno Fernandes play well together?

Perhaps Jorge Mendes isn’t the most powerful Portuguese agent after all. “’Agent Bruno,’” tweeted Bruno Fernandes jokingly after Cristiano Ronaldo sealed his return to Manchester United. A phone call from his Portugal team-mate formed part of a wider charm offensive; ‘Agent Fergie’ and ‘Agent Rio’ played their parts, too. 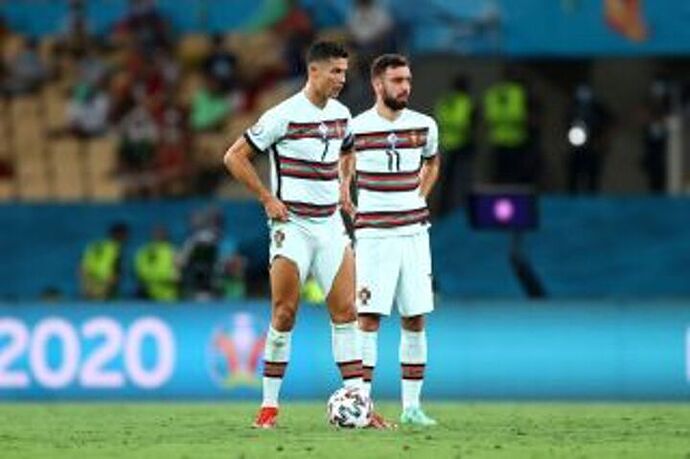 But if Fernandes joined in the wooing of the homecoming hero, it may have been at a personal cost. He has proved so ubiquitous in his first 18 months at Old Trafford, such a regular supplier of goals and assists, that he felt United’s brightest star: Paul Pogba may be the bigger name, David de Gea must have the larger salary, Marcus Rashford might be the campaigner in chief and Harry Maguire is the captain, but Fernandes has assumed a centrality. Now Ronaldo’s capacity to overshadow everyone and everything brings a change in the dynamic.

United has been Fernandes’ team. Portugal has been one of Ronaldo’s. It has not escaped attention that Fernandes’ record for his club is substantially better than for his country. He has a mere five goals in 36 caps, lost his place in Euro 2020 after two ineffectual displays and was substituted with Portugal trailing to the Republic of Ireland last week, before Ronaldo’s late salvage job.

None of which is exactly auspicious. Nor does it actually prove they cannot play together. Portugal have not built a team around Fernandes. United can continue to do so with Ronaldo. Portugal manager Fernando Santos’ preference for 4-3-3 has removed the No.10, Fernandes’ specialist position. Ole Gunnar Solskjaer’s 4-2-3-1 renders one focal. It sets up a Portuguese double act, with Fernandes behind Ronaldo whereas Santos’ tactics can also be formulated with players such as Bernardo Silva, Joao Felix and Diogo Jota in mind. Fernandes is a lesser player as a No. 8 in a 4-3-3, but Solskjaer never deploys him as such.

The threat instead comes to his productivity. Compatriots have similar ways to become prolific. While everyone who refers to ‘Penaldo’ and ‘Penandes’ is utterly tedious, each is a frequent scorer from 12 yards: 13 of Fernandes’ first 26 Premier League goals stemmed from fouls in the box. Take them away and his numbers would have been admirable, but not remarkable.

EXPLAINED The Saturday 3pm blackout: Why aren’t all Premier Leagues games broadcast on television in the UK?

The penalties present a test if United are a meritocracy or a star vehicle. Fernandes is an outstanding penalty taker, converting (according to Transfermarkt numbers) 42 out of 45 from 12 yards. Ronaldo has had more experience, but far more misses, scoring 129 out of 167. It is a 93 per cent success rate against a 77 per cent one. It should be a simple decision, but Ronaldo’s international scoring record comes in part because he takes Portugal’s penalties (and, with Fernandes on the pitch, missed against Ireland last week).

Set-pieces may double up as status symbols. Ronaldo took the most shots from free-kicks in Serie A last season, Fernandes the second-most (behind only James Ward-Prowse) in the Premier League. Ronaldo’s famously wayward free-kick taking never prevented him from taking whichever of Portugal’s he wanted. Arguably he was at his best as a free-kick taker around 2009, and if Fernandes converted more of his for Sporting Lisbon than United, he is arguably a superior option now.

The obvious conflict of interest is that both clearly cannot take the same dead-balls. In open play, however, their pre-eminence has been reflected in the way that moves tend to end with them. Ronaldo had the most shots in Serie A last season, Fernandes the third-most in the Premier League. They occupied different roles but the common denominator is that team-mates were charged with supplying them. Some probably knew when not to expect a return pass. That each is fond of a long-range effort means he is prepared to let fly rather than try and find a colleague in a better position. That willingness to assume responsibility from Fernandes galvanised United; his more self-effacing colleagues seemed to like his charisma and can-do attitude. He had the mentality his manager appreciated. Solskjaer likes risk-takers who back themselves. Perhaps he will relish having two.

Whether Ronaldo and Fernandes will enjoy partnering each other is another matter. Perhaps they are too similar, in attitude and preferred duties. Solskjaer savoured Fernandes’ August hat-trick against Leeds in part because the goals all came in open play, partly a product of running in behind defences and off the ball but put Ronaldo on everything and the most prolific No. 10 in the Premier League still loses much of his potency. The issue is not finding a system that accommodates both but a division of responsibilities that does not deflect from Fernandes’ strengths but still permits Ronaldo to score the same volume of goals. And it is hard to identify an obvious solution.