C/R: Girl, 3, two others killed in another crash at Gomoa Mpota 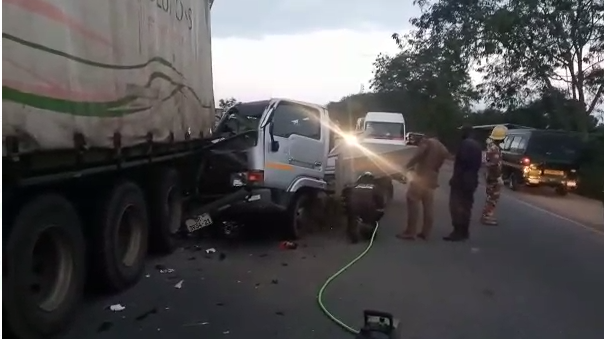 Two people have lost their lives including a three-year-old girl in another accident at Gomoa Mpota in the Gomoa West District in the Central Region.

The accident according to reports happened Tuesday morning around 5:30 am between a Kia Truck and a Cargo vehicle

The victims were a woman believed to be in her 50s, the driver, and a 3-year-old child.

Two of the victims died instantly after getting trapped in the vehicle while the driver of the Kia Truck sustained injuries.

Reports also revealed that the Kia car was from Mankessim heading towards Kasoa whiles the cargo van was also heading in the opposite direction.

An eyewitness said the Kia van caused the accident after a wrong overtaking, causing the collision.

The driver of the Cargo vehicle reported the case at Gomoa Okyereko Police Station.

The Fire Service then came in from Apam to retrieve the trapped victims.

The bodies have been since deposited at the Apam Mortuary whiles the two drivers are also receiving treatment at the same Hospital.

The Families of the deceased are yet to be identified. Police are conducting investigations into the matter.

Hmmm , innocent souls lost on the roads each and everyday, especially the cape coast , winniba roads. The roads safety commission and MTTD must wake up from their sleep and do something.

We live in a country and on a continent where those elected to lead and formulate better policies for us are doing little or nothing to better our conditions. You see, Accidents on our roads have taken more lives than covid-19. Yet they seem more poised in fighting covid than finding solution to the road accidents. We must prioritize if we want to see our country on the big stage one day. My condolences to the families of the lost souls.

Hmmm my brother , you are right. Accidents take double of lives covid is taking and the leaders seem unconcerned about previous lives being lost. MoSt of these people dying are youths who are working to build the nation.

We have a leadership problem as a country. These accidents are sometimes preventable but who wil enforce and ensure the drivers do the right thing ?@Emp_Sel and @Sandy.

When the enforcers and busy enforcing 1ghc into their pockets instead of the law, this will be the result every time.

Our security should be our topmost priority, Vic. The government is full of so much failed promises and policies. This is bad though, since they do the opposite of what they’ve been elected to do. Regardless, we move.

Bad news always, the good ones are few.
This is sad.