Azuma Nelson on the future of Olympic medalist Samuel Takyi: He must run to me now for good advice

Former two-weight boxing champion, Azumah Nelson, says he is ever ready to help Samuel Takyi reach his potential in the sport.

The boxing hall of Famer believes it is time for Takyi to become a professional after his achievements at the Olympic Games in Tokyo.

He revealed that he fears Takyi is not being given the best of advice for his career progression and that he is available to mentor him, Graphic Sports reports. 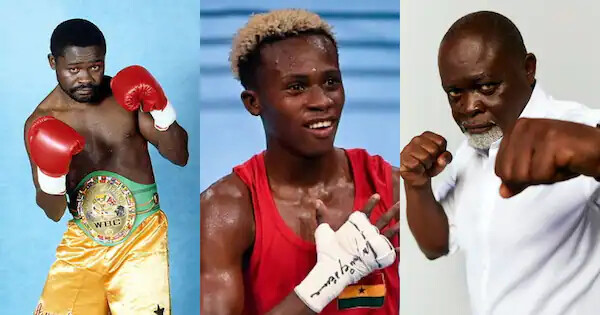 The boxing legend also said that he is willing to introduce Takyi to some promoters and managers in the USA where boxing is thriving.

He further adds that Takyi has outgrown the Amateur division and it could be disastrous if he competes at that level again in the future.

Azumah is one of the longest-reigning world champions in boxing, having won 39 of his 47 bouts with 28 of those wins coming by a knockout.

Earlier, YEN.com.gh reported that Ghanaian boxer, Samuel Takyi, has rescinded his decision to move from amateur to professional boxing after talks with his management and coaches.

The 20-year-old bronze-winning fighter had earlier stated he wanted to go professional after arriving from the Olympic Games.

However, in an interview on Happy Sports, Takyi opened up on his dreams and why he wants to stay in the amateur division.