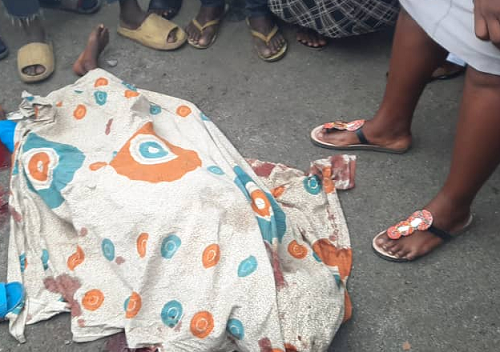 Body of the deceased covered with clothe

A nine-year-old boy has been killed by suspected stray bullet at Awutu Beraku, the capital of the Awutu Senya West District in the Central Region Monday morning.

The deceased, who was hit in the head, was pushing his disabled brother who was in a wheelchair in the midst of a heavy procession as part of the performance of some traditional rites and rituals by the chiefs and people of the area to mark their annual festival.

Due to the outbreak of the COVID-19 pandemic with its associated ban on public gatherings, the chiefs decided not to celebrate the festival but to perform some traditional rituals to mark the event.

According to some eyewitnesses, one of the men following the chiefs in his attempt to load the gun lost control as it went off and into the crowd which hit the nine-year old boy and two others who are in critical condition.

The body of the boy, who died instantly, has been deposited at the morgue of the Trauma and Specialist Hospital at Winneba while others who sustained serious injuries are also being treated at the same facility.

According to the Awutu Beraku District Police Commander, Chief Superintendent Joshua Semanyo, the suspect has since been arrested and assisting in investigations.

So sad. Some things should not happen and they could be avoided.