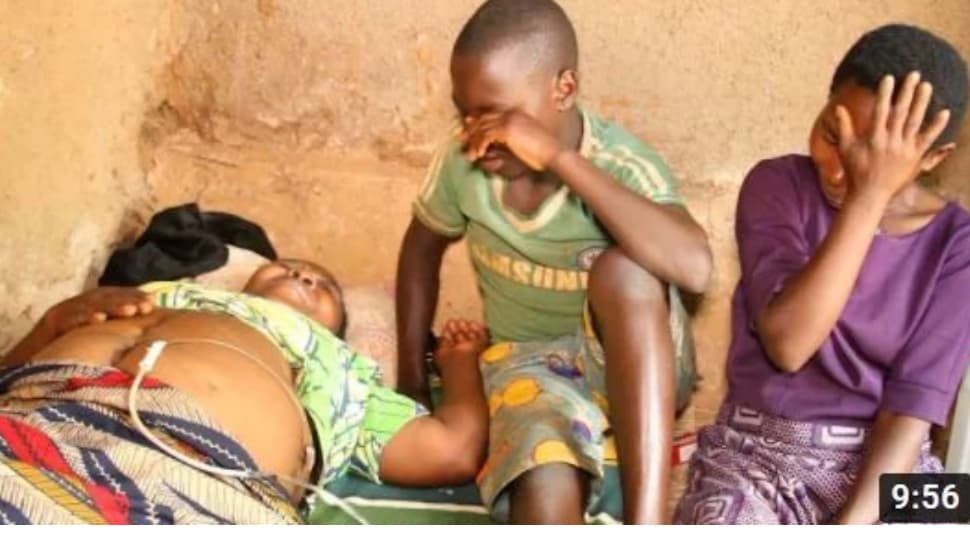 She simply could not afford to see the little children who were loitering the streets aimlessly after being abandoned by their unknown parents, so she decided to remove them from the streets and take care of them.

She made them comfortable to the extent that they have grown to know her as their mother and have an intense emotional attachment with her.

Things however turned sour after the once healthy woman decided to get pregnant and have a child of her own, following pressure from her husband who would not stop lamenting their childlessness.

According to Afrimax TV which did a documentary on the woman’s predicament, she has been suffering kidney failure and now feels it is time for her to die, a situation the children don’t want to imagine, let alone come to terms with.

The children have returned to begging for alms in the streets to fend for their mother who has now become their burden. They say they will do everything within their means to pay her back for the sacrifices she made for them when she was healthy, rather than abandon her to die.

Even after her husband who initially took care of her for some time has abandoned and sacked her from the house, the children looked for someone’s uncompleted building in which they keep and feed her.

They are willing to even donate their kidneys to save her life but do not have the wherewithal to take her to the hospital in the first place. They are therefore appealing to benevolent people to come to their aid and save their God-sent mother they never had

Oops! Some men can be heartless. He caused her pain and later drove her out of the house. She became ill because of that pregnancy, yet he sacked her anyway. May God provide for them.

Eei !! This is serious. Explosion of the tummy and destruction of the internal organs is the most disturbing of all I read in there. Some women really go through a lot just for a child. May she heal from the pain and agony of the life she finds herself in.