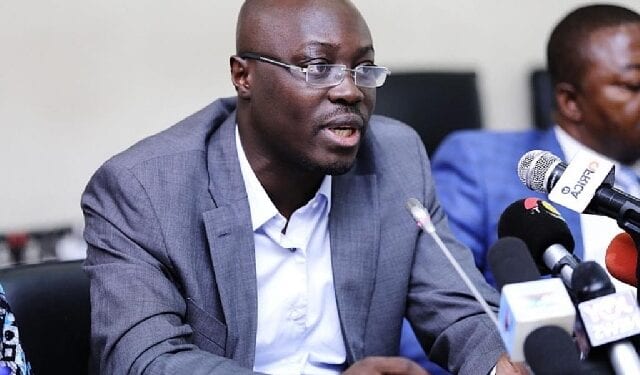 He said the budget is empty and has no hope for Ghanaians.

The member of the Finance Committee in Parliament told journalists after the budget reading on Thursday July 29 that “The mid-year review that was just read is nothing but hopeless.

“It is indeed hopeless. There is nothing new in the statement.

“The Ghanaian economy is in a bad way in the sense that I would have thought that this government would have learned something and have taken right decisions but sadly, if you are to look at the statement that was read to us almost every single revenue item is under performing.

“The government revenue has underperformed within the first six months of the year approximately 2billion Ghana cedis.

“Apart from all the revenue items coming down the biggest of my worry is that this budget is nothing but cosmetic, cosmetic in the sense that at the end of the year 2021, we will come back and see every single fiscal target being missed.

“As we speak they have not commenced agenda 111 for the for the construction of 111 district hospitals. In the original they projected 1.4 billion cedis for that project. Unfortunately, in the mid year review they have reduced to something over 700Mmillion. I was expecting that the government will rather increase the allocation for agenda 111 instead of increasing the allocation for good and services.”

The Finance Minister Mr Ofori Atta has announced the setting up of a scheme to help the youth set up businesses across the country.

To be referred to as ‘Youth Banc’, the scheme will be championed by the Enterprise and Youth Support Fund (EYSF).

Addressing members of Parliament (MPs) on Thursday, July 29 as part of the presentation on the mid-year review of the 2021 budget, Kenneth Ofori-Atta admitted that the issue of employment and jobs for the youth has been a worry to the government.

This, he stressed, has been exacerbated by the impact of the coronavirus pandemic.

“Mr. Speaker, the Enterprise and Youth Support Fund, which aligns with Government’s overall strategy of developing a competitive and viable private sector economy, will Set up a ‘Youth banc’ with the aim of financing youth-led start-up businesses across the country.

“As part of this initiative, an online investment hub will be established for youth across the country to access information for the purpose of establishing businesses.

“Under this initiative, it is estimated that over 100,000 jobs will be created.”

Member of Parliament for Old Tafo Ekow Vincent Assafuah has noted that Ghana’s economy is picking up from the shocks of the coronavirus pandemic.

Commenting on the mid-year budget statement presented to Parliament by Finance Minister Ken Ofori-Atta on Thursday July 29, he said focuses on amongst many other things, jobs for the teeming youths of this country.

“There is hope on the horizon. Our economy is picking up from the shocks of the Covid-19 pandemic. Keep hope alive. Ghana is working,” he said in Facebook post after the budget reading.

Mr Ofori Atta told Parliament that for the first time in the history of the fourth republic, the exchange rate did not see a spike after an election year.

“For the first time in the fourth republic the exchange rate did not see a spike after an election year.

“Cumulatively, from the beginning of the year to date the exchange rate has depreciated by 0.6 per cent against the US dollars and appreciating by 3.6% against the Euro,: he stressed.

He further told the House that he did not come to ask for more money from the House in the mid-year budget.

He also said he did not come for more taxes rather, he came to update the House and the country on the performance of the economy during the first half of the year.

A senior lecturer at the University of Ghana Business School Dr Lord Mensah has also said he is satisfied with the statement.

Dr Lord Mensah told Dzifa Bampoh on the First Take on 3FM that “I will say indeed I was somehow satisfied. I think for once the cry of Ghanaian have fallen into the good ears of the economic manager.

“If you look at the situation on the ground now, The Finance Minister and his team couldn’t have afforded than to maintain the status quo to ensure that we stay within the fiscal appropriation that we called for.

“If you look at our debt situation and then happenings across the globe I was not expecting the Finance Minister to request for more money to revise the budget deficit that was read in November for 2021.

“Clearly, it shows that as a country we have positioned ourselves to be conserved, to be prudent in our call for money. The situation is not that easy.”

Let me make it simple for you, NDC’s Ato Forson, mp and economist is saying that , the mid year budget by Ken ofori Attah is like a woman that is not beautiful but has applied plenty make up on her face to make her look beautiful. However, the whole village knows she’s urgly (empty) as Ato want to put it.