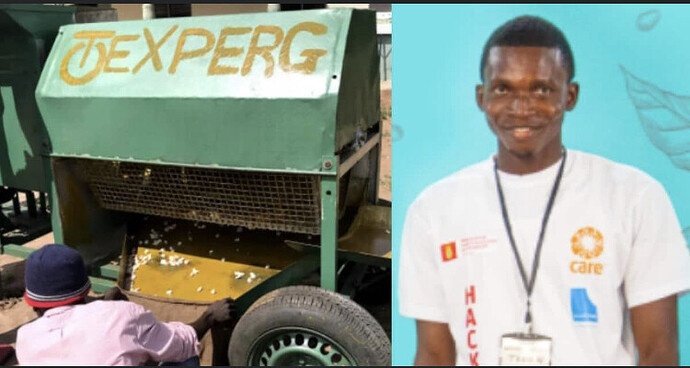 A vibrant Ghanaian boy, Daniel Amoshie, has made many proud by winning an innovation competition after inventing a cocoa pod breaking machine.

He came out victorious in an agric innovative inspired competition known as WeGrow hackathon.

According to a publication by Ashesi University, Daniel grew up in a cocoa farming community in the Ashanti region of Ghana known as Mpasaso.

Noticing that nearly all pre-harvest activities for cocoa had been mechanized except for the cocoa pod breaking process, the young man decided to do something about it.

Having had many unsuccessful internship applications, Daniel used his school vacation to apply what he had learnt in school to mechanize the pod breaking process in his community, Ashesi reported.

Daniel’s intentions going through the project was to help make cocoa harvesting easier in his community, build a far less expensive pod breaking machine, and to eventually venture into mass manufacturing.

The brilliant young man came up with a 3D Model after five weeks and with assistance from his engineering lecturer, a local welder and some classmates, a prototype was built.

With his prototype, he participated in an agric innovation inspired competition called WeGrow hackathon, organised by Care Ghana, in partnership with Denmark’s Ministry of Foreign Affairs in July 2021.

His team, TeXperg, emerged as winners of the competition.

As part of their winning price, TeXperg will be receiving support from Kosmos Innovative Centre, a Kosmos Energy business incubator with an emphasis on agriculture innovation.

This is just a news for just a day. The government can’t even invest in this talents but rather be busy importing this same stuffs from other countries