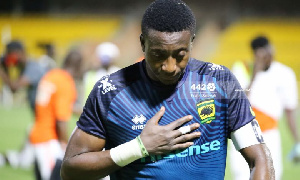 The management of the record holder of the Ghana Premier League, Asante Kotoko are likely to terminate the contract of goalkeeper Felix Annan after the player had put in the request.

After losing his number one spot to goalkeeper Razak Abalora, Felix Annan has already asked the club’s management to terminate his contract.

According to Fila Sports, the club’s administration wants to show their appreciation to the captain by terminating his contract and allowing him to join any team of his choosing.

The former Wafa goalkeeper has shown interest in joining an Iranian club according to the report from filasportnews.

Felix Annan, on the other hand, might do a U-turn and sign for Tarkwa based Medeama SC on a free transfer in the near future.

Kotoko actually ended this guy’s career and now ,wants to terminate his contract. They used him until the he wanted to go marry , then they brought Razak and never want to bring back Felix after his wedding. That was the beginning of Felix’s woes as a player and captain of kotoko.