• The midfielder joins the Porcupine Warriors on a three-year deal

Richmond Lamptey joins the record holders of the Ghana Premier League from Inter Allies, who were relegated from the 2020/2021 league after they ended the season as the last-placed team.

Despite the bad season, Inter Allies had in the just-ended season, Lamptey was one of the most outstanding midfielders due to his exceptional performances.

He scored three goals and provided two assists in 27 Premier League games while winning four man-of-the-match awards in the process.

“We’re delighted to announce the signing of midfielder Richmond Lamptey from @InterAlliesFC on a three-year deal​:writing_hand:??? !!! 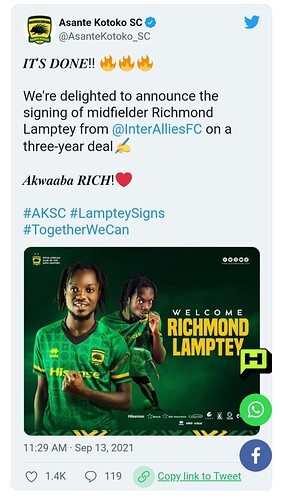