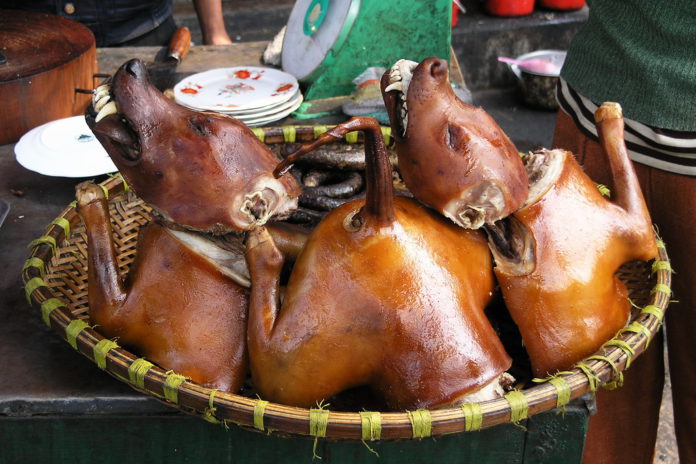 An International Animal Rights Activist, Natasha Choolun, has petitioned the Government of Ghana to ban the trade in cat and dog meat for human consumption.

“Dogs and cats are not food, but loyal companion animals that should be treated with kindness and respect, not brutalised and eaten,” she said in a petition.

The petition noted that the trade in dogs and cats was widespread across African countries, making them unattractive to tourists who are aware of the “cruel” industries and are unwilling to invest in those countries.

It said besides the fact that it was cruel to kill and eat those animals, they were also kept under unhygienic conditions, promoting the spread of fatal diseases.

The petition said: “The World Health Organisation has confirmed that these global live animal markets must be closed as they are at the root of COVID-19 and are also a breeding ground for the spread of other fatal diseases.

“The brutal dog and cat meat trade is putting human health at risk from consumption of dogs and cats in form of cholera, rabies and other deadly diseases and now COVID 19.

It said the government must also ban wildlife trade, dog racing and dog fighting and “implement enforceable laws to protect these animals from harm.”

I agree with all her points except these:

Dogs and cats are not food, but loyal companion animals that should be treated with kindness and respect

By this account all animals deserve respect and kindness. Not just dogs and cats because that’s what she chooses to have as pets. If enough people had pigs as pets I bet there’s be activists against the eating of pork.

She’s saying we should be herbivores then. Because any other animal sacrifice will be demonic. But humans are omnivores.

protect these animals from harm

What about the other animals for meat.

Don’t get me wrong, I’m not supporting eating dogs/cats but her arguments are not strong enough to me.

What about the other animals for meat

The answer is simply emotional prejudice. People develop feelings for dogs and cats compared to other animals that are being slaughtered every year for meat.

Dogs and cats are cute and evoke feelings of warmth and tenderness in people because they are our ‘other companions’ of life.

It is hypocrisy though. I agree. These animal rights activists must be consistent and not be selective of what they want to protect.

The brutal dog and cat meat trade is putting human health at risk from consumption of dogs and cats in form of cholera, rabies and other deadly diseases and now COVID 19.

But people who eat cat and dog meat though, don’t they feel some sympathy for the animals? A pet that keeps you companion, protects your property, play with you and helps you release stress too , you want to consume. What insensitivity could see humans have within them?

As for the health risks of consuming these animals, people don’t see oo. I know some section of Ghanaian tribes won’t agree with me but we must respect the rights of pets

These animal rights activists must be consistent and not be selective of what they want to protect.

Are you for real? You mean pets and wild animals should be treated the same? Do you know that dogs and cats have emotions that they transfer to their owners and people around them? These are not mere animals ooo, these are pets and they are very therapeutic in case you don’t know. Why do you think dogs are always seen as synonymous to loyalty. @Kwabena

these are pets and they are very therapeutic in case you don’t know.

So they should fight for all pets. Bees, elephants, all primates. Some people have these as pets too. Not just cats and dogs. Just saying.

I beg to differ, @siaw , how can you say we should give the same previledge of domestic animals to all animals, including wild animals. So mosquitoes, snakes, Gyata, Apro, and even sturbon Kusie must have the same right as dogs? Aah bro, aden;, bone ben?

how can you say we should give the same previledge of domestic animals to all animals, including wild animals.

You see, man is responsible for everything. The dog and cat you see were wild animals. We chose them, they’ve been domesticated. There are domesticated snakes and pigs too.

So the do
g and cat defence like @kwabena said, is emotional prejudice.

Ah almost forgot, we chose them and biologically engineered them to be the way they are today.

Okay I get your point ; that all animals deserve the same protection right? But I Ghana, people don’t haphazardly kill and eat lions and snakes as they do to cats and dogs.

Wait oo, so the mouse and rats that have been eating my bag of rice and maize at night, I should leave them erh. It is “unpossible” . Not in Ghana. Here, we have only two pets and friendly animals (cats and dogs ) the rest found at home are for pepper soup .

The fact is the domestic animals are the mass target and hence they need more protection, how many times do humans actually go for snake and tortoise as meals, don’t get me wrong about her selection of animal to protect, I’m saying let’s safe the close ones first

Animals generally it being domestic or wild, when you treat it with love it hardly harms you. There is this farmer in Costa Rica who is living with a Crocodile for 20 years now. He found the crocodile shot in the head and he brought it home to take care of it till it was fully healed and sent it back to the river he found it, only to return home and saw the crocodile crawling back to his house and since then he’s living in the same house with it. The crocodile behaves like a domestic animal now. But in Ghana we highly recognize Dogs and Cats as pets that’s why she’s petitioning for them only.

I don’t want to deviate from the subject, but can you really tame a matured predator, because I don’t believe animals have that instinct or emotions naturally for something or someone except for their little ones and unless they are trained to understand such instincts… so the crocodile was showing gratitude or it feels safe there??

the crocodile was showing gratitude or it feels safe there??

Showing gratitude in return for the safety.

Huh, snakes mice, tortoise etc, these are not animals that are easily adaptable by nature. It can take forever to train a tortoise as a pet , as for snake, I don’t know why someone will want it as a pet.

Truth is, the rate at which some Ghanaians are consuming cats and dogs (borga) meats in
this country is alarming and these animals maybe become endangered. We must save them now.

But then I use to stone cats that comes to our house because they shite around, and they still come back everyday even with bruised legs… they don’t have that same instinct or what?

so the crocodile was showing gratitude or it feels safe there??

Yeah the crocodile in it own instinct feels at home now and safe from any danger that’s why it returned to the farmer.

You’d be shocked to hear the price of dogs meat at Bolgatanga. But I personally loves dog and cat and I don’t see the reason why one must consume dogs and cats. But here we are right in Ghana.

Believe it or not, ANY animal can be domesticated. But you have to be realistic with it. Hence why it would be unrealistic to domesticate an elephant or a giraffe for example.

Dogs and cats were wild, just like all the other animals that are being mentioned in this thread, and they got domesticated. Through the years hybrid forms were tactically bred by MAN to create more domesticable animals in our modern cats and dogs.

For example, small dogs such as chihuahua are hybrids and tactically bred by man and such dogs would not survive in the wild nowadays because they were bred to be naturally domestic.

So it could’ve been any animal in place of cats and dogs and you would say the same things about them because it would become the normality.

Don’t forget animals evolve and even now you still have dogs and cats in the wild. So, if you love dogs and cats so much, get a wild dog in your house or a tiger and let see if that loves continues.

Sorry for the long reply but I had to make clear that i’m not defending any animal in specific. I’m just saying that if you want to really protect animal rights, protect all of them don’t be selective.