Am here once again to bring you all you need to know about the Biggest Hotel in Africa situated at Kwahu in Ghana plus a video to it. On the Mountaineus City of Kwahu in the Kwahu East District a suburb in the Eastern Region of Ghana comes Kwahu-Nkwatia where the Biggest Hotel in Africa is situated. Rock City Hotel is what am talking about, even though the 1st phase of the project is completed and officially opened with about 300 rooms, the ongoing project is believed to be among the Top 50 Biggest Hotels in the whole World with about 2,200 Rooms when it’s Completed. One of the Biggest Underground Night Club in Africa or probably in the world can be located at Rock City Hotel which can holds a population of about 2000 attendants.

The 300-rooms, 4-star hotel has an outdoor pool and also features a free WiFi in the public areas along with free in-room WiFi. Free parking space available for those who drives, wheelchair service also available all the time. Front-desk staff can answer questions 24/7, and assist with dry cleaning/laundry, concierge services, and access to locker space.

Restaurant and bar/lounge are also available at Rock City Hotel, Onsite venue – This restaurant specializes in local and international cuisine and serves breakfast, lunch, and dinner. Remember Kidi’s popular Enjoyment track? Rock City Hotel is the secret behind that amazing music video with it’s hygienic and serene environment. You need to visit the place because as a proud Kwahu boy, I visited the place and it was awesome.

Checkout some photos of the Hotel below; 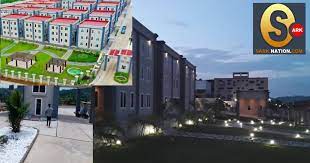 The world class Rock City Hotel is owned by the country’s Minister of State in charge of National Security and Member of Parliament for Kwahu-Abetifi Constituency, Honourable Bryan Acheampong.

Construction began 11 years ago and is currently partially opened for business, roughly by 2025 is when the entire project is believed to be completed and with a total of 2,200 rooms, Rock City will come with incredible attractions such as a world-class aquarium and water park, a zoo, cable cars, motorsport, an 18 and 9-hole golf course, among others and it is targeting Meetings, Incentives, Conferences, Exhibitions (MICE) and also positioning as a Family and Fun destination.

I was in Kwahu few months ago, I have physically seen the building and entered a couple of Rooms in the hotel, you need to see it to be able to understand what I felt … is like living in abroad